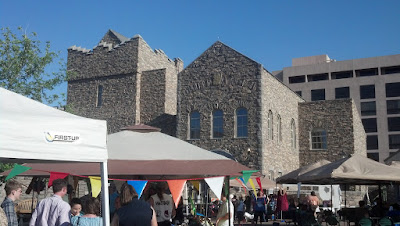 Last Sunday, Hilde and I spent the afternoon at the Phoenix Tribal Gathering, a rather small event mixing Pagan, New Age and Celtic enthusiasms, held at the Irish Cultural Center near downtown Phoenix.

The ICC is part of  Margaret Hance Park; when the section of I-10 that runs through the actual city of Phoenix was finally completed, the section between 7th Avenue and 7th Street was made a sunken area with the freeway going thru a half-mile-long tunnel.  The topside of those tunnels couldn't support the weight of full multi-story buildings like surrounding areas, so the major chunk of it was landscaped and turned into Hance Park; besides the general park area, it also includes the Japanese Gardens and the Irish Cultural Center.

The ICC is a nice looking building, even if it's not an authentic stone building; the stone facing (which is probably fauxstone) is a passable imitiation.  It would probably look more authentic in overcast weather with a light drizzle.  Get some ivy growing up the walls, even better.

There's quite a contrast between the ICC and the ultra-modern Burton Barr Library (the central Phoenix branch) across the street.

(I guess the reward for spending one's life as a political hack is to have a park or public building named after you.  Meh.)

We have quite a few contacts in Pagan, etc., circles, so we caught up with some friends, browsed the crafts contest entries, listened to a little music, and browsed the various vender booths.  One booth was not only offering massages, they had a new puppy with them.  Massage therapy and pet therapy in one!  (I took advantage, since my shoulder was starting to ache by that point in the day.)

I also had a Tarot reading done.  I'm a pretty thorough skeptic, but Hilde's more open to that sort of thing and urged me to have the reading done.  Very interesting results.  I don't believe in Tarot as prediction or prescription, but I think they can help trigger lines of thought that may help reach decisions that had been treading water before.  So the results seem to have helped firm up some decisions I'd already been considering, about how to deal with the consequences of breaking my arm last December.  It's a pretty distant possibility that I'll go back to the status quo I had before the accident, so I need to figure out in what direction I want to go and try to take steps toward those goals.   I'll probably say more about that in another post.

But it was good to get out of the house for a little while and not have it just be for a doctor's appointment.
Posted by Bruce at 5/21/2013 01:54:00 PM
Email ThisBlogThis!Share to TwitterShare to FacebookShare to Pinterest
Labels: architecture, Arizona, personal, Phoenix