It's been a while since I did a "Snarkaption Nation": 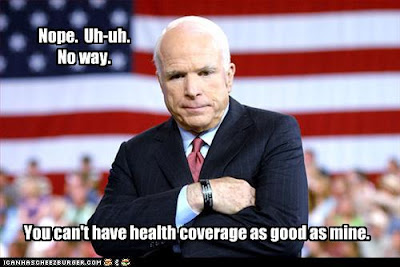 Posted by Bruce at 8/29/2009 11:20:00 AM No comments: Links to this post
Email ThisBlogThis!Share to TwitterShare to FacebookShare to Pinterest

After a long illness and hospitalization, our friend and neighbor Anne Braude passed away on August 25, 2009. Hilde and I were at her side. I'll write about Anne at much greater length later; she was a pretty extraordinary person. I'll probably also write some posts about having, and having to use, a medical power of attorney (and, for the last few weeks of Anne's life, a financial power of attorney), and about trying to deal with hospital rules and policies.

Hilde herself ended up in the hospital early the next morning, after experiencing stroke-like symptoms much like what she went thru in May. Like then, this appears not to have been a real stroke, but something caused by another UTI infection turned septic. She was mostly recovered later the same day, but has remained in hospital for tests and antibiotics. The major concern at this point is that her blood pressure has gone high (into the 200's) and stayed there; this is something completely new for her, and she's always tested in the "low" or "too-low" range for her blood pressure before.