Started at the new job on Monday.  All this week and part of the next will be training and learning the ropes.

A lot of differences from my last security guard position.  I'll be working at a large facility that makes sports equipment, covering about fifty acres and a dozen buildings, with hundreds of workers.

And in an odd coincidence, one of those dozen buildings is one I've actually worked in before, back about thirty years ago.  Early in my career with the Postal Service, one of the stations I worked out of was a temporary station in a leased warehouse, serving the expanding areas of Northwest Phoenix.  Eventually a dedicated Postal Service station was built about a mile further north and all the postal employees in that warehouse were moved to the new facility.  The sports manufacturer, who was located across the street from the warehouse back then, tended to buy up surrounding business properties as they became available.  That warehouse was one of the properties they bought and expanded into.

(The manufacturer is planning on some major construction and renovation in the near future, and that old warehouse is one of the buildings slated to be torn down.  It was already a pretty run-down building when I worked in it three decades ago.)

The old warehouse isn't the only memory-evoking thing about the new workplace.  My dad was a machinist for an airplane-parts manufacturer for most of the years I was growing up; sometimes we'd pick him up from work if Mom needed to use the car that day, and the company's Christmas parties were frequently held at the plant itself.  So the sight and sound and smell of the manufacturing equipment is a familiar one.

(Although most of the big milling machines are now computer-controlled, and enclosed in big sound-muting enclosures.  When Dad did milling, he did so right up beside his machine; I don't recall him ever having a serious injury, but his arms frequently had small nicks and burns from sharp, hot bits of metal coming off the pieces being milled.)

The other thing the new workplace makes me think of are the trips I made to the Parmaount Studio lot back in 1990, when I pitched the story and wrote the script for the "Clues" episode of STAR TREK: THE NEXT GENERATION.  Both places hold numerous buildings of various sizes, built over decades, many refurbished and re-purposed over the years, with hundreds of employees and executives going from building to building in a hum of activity, either on foot or in golf carts.

The new workplace seems to have its act together better than the old one, too.  Policies, instructions, and responsibilities are pretty straightforward and clear.  At my previous workplace, you never knew from day-to-day what you might be yelled at for, because policies there could turn on a dime and change at management's whim.  (One of the major reasons I didn't stay when they converted to an in-house security department.)

So, so far, I'm pretty happy with the new job.

Posted by Bruce at 3/30/2012 04:16:00 PM No comments: Links to this post
Email ThisBlogThis!Share to TwitterShare to FacebookShare to Pinterest

Don't Blink Or You'll Miss Him


Hilde and I got around to watching the first episode of the new Ashley Judd action drama for ABC, MISSING, last night.  I hadn't realized that Sean Bean had a role in the episode, as Judd's husband.

So what's next for Sean Bean?  I hear Spinal Tap is looking for a new drummer....
Posted by Bruce at 3/23/2012 01:58:00 AM No comments: Links to this post
Email ThisBlogThis!Share to TwitterShare to FacebookShare to Pinterest

But Wait! There's Good News Too! 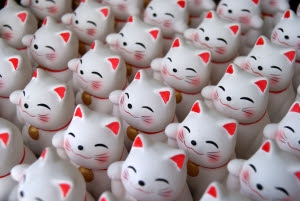 In contrast to the previous "Black Candles" post, there are actually positive things happening.

I had a job interview earlier this week, for a Security position at a popular sports-equipment manufacturer's facility.  Got the word this afternoon that I'd been selected for the position.

I'm pretty enthusiastic about the new job.  The commute will be about half what I'd been doing before, the pay starts at fifty cents an hour more than I'd been getting, and -- whoo-hoo! -- no damn drunks to deal with*.  In the morning I go in for physical and drug-screening and paperwork, and there'll be a background check, but I expect to actually be working there within a few days.

So color me pleased.


*I used to think I disliked drunks.  But then I started working at that upscale shopping center with the over-serving bars, and had to deal with drunks on a frequent basis.  I learned there that I don't dislike drunks; I despise them.

(photo is by ScooterZen, from stock.xchng)
Posted by Bruce at 3/16/2012 12:30:00 AM No comments: Links to this post
Email ThisBlogThis!Share to TwitterShare to FacebookShare to Pinterest

Burning The Black Candle At Both Ends 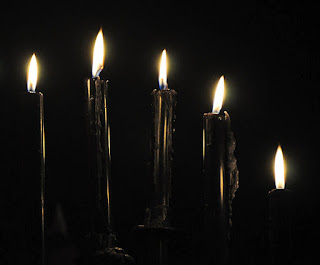 We're getting to the age where far too many of our friends and acquaintances from our generation are starting to disappear.

Our friend Jan Lockett passed away in late January.  Back in the mid-1970's, Hilde and her then-husband moved to Tucson, which was where that husband walked out on Hilde and their son.  Jan was one of the Tucson people who gave Hilde support in that trying time.  When Jan was enthusiastic about something, she could be very enthusiastic. ("Excited puppy" is the phrase that comes to mind.)  This last year, she'd had a series of medical emergencies and complications that really made it difficult to maintain that enthusiasm.

Don Markstein passed away last week.  Don and I became acquainted when we were both publishing fanzines in the 1970's.  Don enjoyed being an iconoclast, a gadfly, a devil's advocate.  Sometimes he got too close to, or even stepped over, the line between "gadfly" and 'troublemaker".  But he was witty and funny, and I liked him.  I'm sorry we had, except for the occasional brief encounters at conventions, pretty much fallen out of touch.

And I got the news yesterday that my cousin Linda had passed away.  She'd been diagnosed with a malignant brain tumor last year, so the news wasn't all that much a surprise.  Linda was loud and brassy and sometimes vulgar, but she was also one of those relatives who act as a glue for the rest of the relations.  It was frequently her place where family get-togethers took place, for Christmas and other occasions.  I'll miss her.

It's hard to keep a positive attitude about growing older when so much bad news comes along with it.

(I've said it before, but: "The Golden Years: They Kinda Suck".  Perhaps I should have that put on a t-shirt.)


The local Musical Instrument Museum's latest email noted that their octobasse was one of the instruments used for the soundtrack to the forthcoming HUNGER GAMES movie. The octobasse is a bowed lute. If a regular lute is considered normal, then something like a bass cello would be a bowed lute on steroids. Which would make the octobasse the Incredible Hulk of lutes, because it's TWELVE FRIGGIN' FEET TALL!!! Here's a picture to show the scale: 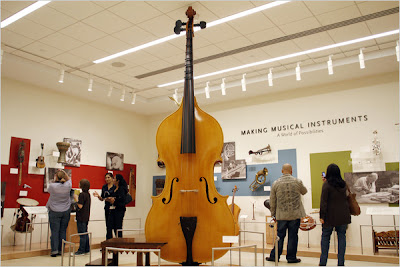 The performer has to stand on a stool to play the octobasse, frets are done by a series of levers on the side of the instrument, and its lowest notes can be outside the normal range of human hearing.

What it most reminds me of, though, is something in comic books.  Not the Incredible Hulk, though that's a pretty apt simile, but Batman.

Yes, Batman﻿.  Back in the late 1950's and early 1960's, one of the comics memes that appeared frequently was Batman chasing and fighting crooks and villains in and around oversized, giant objects. 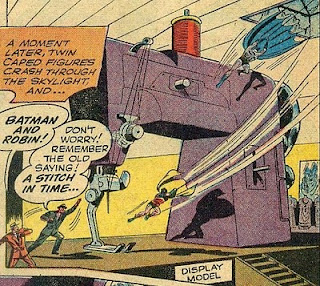 For an extra thrill, you could always add in one of the semi-lame supporting characters from that same era, like Bat-Hound or Bat-Mite or that early version of Batwoman who clearly suffered from some form of color-blindness:

YouTube videos of the octobasse in action available here.

Posted by Bruce at 3/14/2012 03:00:00 PM No comments: Links to this post
Email ThisBlogThis!Share to TwitterShare to FacebookShare to Pinterest

Clementine Abstract, a photo by Bruce on Flickr.
Picking off the unwanted threads and veins from a clementine, I noticed they made an interesting abstract where I laid them on the leg of my jeans. My handy smart phone's camera function meant I could take the picture without having to move.

(Smart phones are addictive. I find myself using it more and more often, for more and more applications, than I ever expected to.)
Posted by Bruce at 3/04/2012 12:31:00 AM No comments: Links to this post
Email ThisBlogThis!Share to TwitterShare to FacebookShare to Pinterest
Newer Posts Older Posts Home
Subscribe to: Posts (Atom)