I first heard Richard Thompson's music back when Mirror Ball came out in 1994, as part of an interview with him on NPR.  "Wow! Great music!" I said to myself back then, and later went on to pick up the entire album.  "Wow!  Really great music!"  And I've picked up a lot his new works since then and some of his backlist, both solo and his earlier works with the group Fairport Convention and in collaboration with his then-wife Linda Thompson.  "Why have I never heard of this guy until now?" I asked myself back then.

That's still a puzzle.  About the same time as that NPR interview, Rolling Stone magazine ran a piece on Thompson which described him as "the biggest rock-&-roll star you've never heard of."  He's an extraordinarily talented artist in multiple ways, frequently acknowledged as one of the world's best guitarists, best songwriters, and best performers.

The local Music Instrument Museum has been presenting a wide-ranging series of music performances in its Music Theater since it opened its doors about two years ago, and is beginning a new "Virtuoso" series by top-of-their-field artists.  Richard Thompson's appearance is the first in that series.

I generally don't enjoy live music performances (more on reasons for that below) and stick to recorded media, but I was tempted-plus-a-bit when I saw Thompson's name listed in the MIM's newsletter.  Some of the other Thompson fans I've encountered online have enthused about his live performances.  So I put out a query regarding the ambience at his performances, and the response was reassuring enough to decide to purchase a ticket.

Good call, me. The MIM's Music Theater seats about 450 people, with steeply banked rows that allow good visibility to everyone, and comfortable seats.  (One quibble:  The backs of the seats are solid pieces of wood that extend down past the top edge of the next row's floor.  Essentially, the seats in front of you form a solid wall; most movie theater seats arranged similarly leave a space open towards the bottom, where you have a few more inches of legroom available to tuck your toes into.)  The acoustics there are very, VERY good.

(Hilde and I have been to a few events at the Glendale Public Library's "Live At The Library" program, when they've featured artists like Joe Bethancourt.  The library theater's acoustics are decent enough, but MIM's were markedly better.  Sorry, GPL.)

Thompson comes out, and you can tell that this audience sure has heard of him, because he gets a standing ovation before he starts performing.

Thompson was on stage for an hour and forty-five minutes of nearly continuous music.  His selections were a mix of his most popular ("Wall of Death", "Shoot Out The Lights", and -- fuck yeah! -- "1952 Vincent Black Lightning") and others less familiar to me.

Those popular songs help show why his live performances are memorable.  When a lot of long-experienced artists perform their "standards", songs they've performed dozens or hundreds of times before, they can be performing on an "Automatic" setting, with only a perfunctory presence onstage.  Thompson performs each piece with the same intensity and feeling as if it were a brand new song.

One song, the second of the night, is a new song, a preview from his current album-in-progress, with the refrain "Good things happen to bad people."  (Thus not only cinching a future album sale for Thompson, but a title for this post.)  And there's one cover song, a "Hipster Hamlet" song by 1950's Broadway-musical writer Frank Loesser that was probably intended as pure comedy in its original incarnation, but is given a level of pathos by Thompson's rendition, especially in the refrain "Dog eat dog eat dog in Denmark".

Thompson's guitarwork is spectacular.  Before the show started, music producer Tony Berg, who'd helped MIM develop the "Virtuoso" program, spoke about Thompson for a few moments, and mentioned that Thompson could not only sound like there were two guitarists playing at once, but like there were two great guitarists playing at once.  This was not an exaggeration.  At times during Thompson's performance, I not only wondered how he could pull so much music out of one instrument, but wondered "Why are this man's fingers not bleeding, or on fire?"

The MIM doesn't allow photography or video, so I can't give any images from last night's concert, but here's a good YouTube video of Thompson performing "1952 Vincent Black Lightning" from 2010:

While I don't have full-blown panic attacks, there are some things about public events that can make me feel anxious, uncomfortable, and on-edge.  Crowds, especially large crowds and crowds that mill about and around.  Raucous or unruly behavior (especially drunks). Overly loud noise levels (both from performers and audience). Poor (or outright bad) acoustics.

(The "bad acoustics" bit tends to also apply, a lot, to filkers at conventions.  When you're performing inside a hotel meeting room, almost always a hard-walled rectangular box, even a filker with a good voice or instrument skills can sound like, well, crap.)

So that pretty much leaves well-behaved theater-style performances, with a seated audience, like the MIM or the Glendale Library.  For a lot of people, such an experience feels restrictive.  For me, it feels comfortable.

One thing that struck me about the audience at Thompson's concert last night was how age-skewed it was.  Most of the attendees were of middle-age or (like me) late middle-age; the most prominent hair color was grey.  Walking out to my car after the concert, I noticed that one attendee had brought his (I assume) daughter, about age 11 or 12, with him.  I was almost tempted to shout, "Thank you, sir!" at him.

(I would think that this might be because people of that age are more likely to be able to afford $60 for a ticket, if I hadn't mentioned it to one of my co-workers who's in her early 20's and heard in reply that she'd spent $100 for a ticket for a Rammstein -- industrial metal band from Germany -- concert.)

Also, not directly related to the concert, but, just to note it for the record:  I noticed a few years ago that "The Star Spangled Banner" can be sung disturbingly well to the tune of Thompson's "Cooksferry Queen".

Posted by Bruce at 6/14/2012 01:48:00 PM No comments: Links to this post
Email ThisBlogThis!Share to TwitterShare to FacebookShare to Pinterest


I've seen some of the coverage from Britain of the celebration over Queen Elizabeth's Diamond Jubille, the 60th anniversary of her ascension to the British throne.  Most notably the 1000 ships and boats gathered as a fleet of honor.

So I've told Hilde that if we get to our 60th wedding anniversary, we'll celebrate in a hot tub... 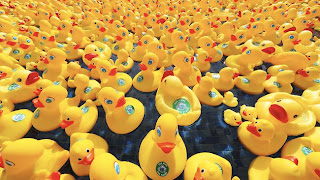 ... with a thousand rubber duckies.

(Only twenty-five years and a bit to go!)

Posted by Bruce at 6/05/2012 11:21:00 AM No comments: Links to this post
Email ThisBlogThis!Share to TwitterShare to FacebookShare to Pinterest
Newer Posts Older Posts Home
Subscribe to: Posts (Atom)