The Way The Future Wasn't 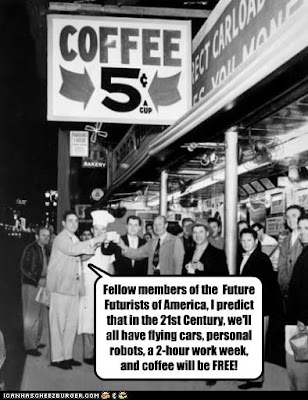 Posted by Bruce at 7/27/2010 01:17:00 PM 2 comments: Links to this post
Email ThisBlogThis!Share to TwitterShare to FacebookShare to Pinterest 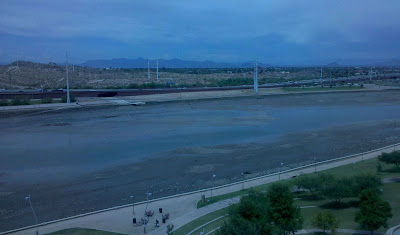 Tuesday night, a portion of the dam that creates Tempe Town Lake, a recreational spot in the normally dry Salt River riverbed bordering on Tempe, Arizona, burst and released about 750 million square feet of water into the riverbed, creating flash flood conditions downstream for a considerable distance. The Salt River bed is mostly undeveloped, so damages have been light, though there's some fear homeless people who ocasionally set up camp in the riverbed might have been washed away. (Hard to tell yet.)

The dam in question isn't a normal concrete dam, but one that uses a number of extremely large inflatable rubber barriers to hold back the water. The barriers can be inflated or deflated to control the lake's volume.

The barrier section that burst ("exploded" was the word used by some witnesses) was one that had been supposed to be replaced earlier this year. Since the dam was first built about ten years ago, that particular portion had been riding higher than other sections, and it's top edge had been out in the open sunlight, rather than slightly underwater like it was supposed to be.

Take a piece of rubber. Leave it out in the Arizona heat and sunshine for ten years. What do you expect to happen? Duh.

The replacement didn't happen when it should have, apparently for budgetary concerns on the part of the Tempe city council. Double-Duh.

The company that built and installed the rubber barriers is named Bridgestone. I wonder if this is the same Bridgestone that had to recall about six million defective auto tires about ten years ago when the tires began blowing out much faster than would have been expected? Triple-Duh.

(note on the photo shown above: According to the New Times article, the photo and several others were taken from the seventh floor of the old Hayden Flour Mills building. This explains why there was no photographer's credit given; the Hayden building has been empty and boarded up for years, so anyone photographing from there would be doing so illegally. I've seen other photos of the insides of the Hayden building, and it's pretty decrepit, so it was probably dangerous for the photographer as well.)
Posted by Bruce at 7/21/2010 04:53:00 PM 2 comments: Links to this post
Email ThisBlogThis!Share to TwitterShare to FacebookShare to Pinterest

My Life As A Superstar Cheezburgerer

A couple of the captioned photos I've done for Pundit Kitchen, the news-photo wing of the Evil I Can Haz Cheezburger Empire, recently made it to the front page, to gain notoriety, acclaim, and votes. This first one has gotten over 800 votes:

And this one just got front-paged a few days ago, and has gotten nearly 240 votes so far:

I thought that was pretty cool. Go, me. And then I had to read the comments posted to the photo, and realized that a lot of people were voting for and favoriting the picture not because of my witty, ingenious caption, but rather because Look at those awesome abs! Those guys are HOT!

Back in the old days, I knew a guy who had abs that chiselled and defined. I happened to see him nude from the rear one time (don't ask) and not only did he have those rippling abs, he had a rippling butt. Did you know there's a specific term to describe guys with that kind of physique? Yeah, really: Bastards!

Bonus LOL below. This one I find rather odd, because it only got one vote on the "Voting" page (from where LOLs are picked to go to the front page), but it's been Favorited by over two dozen people. Huh. I think it's funny:

Posted by Bruce at 7/17/2010 04:14:00 PM 7 comments: Links to this post
Email ThisBlogThis!Share to TwitterShare to FacebookShare to Pinterest

God, I Hope These Aren't For Real Books

In the spirit of Pride & Prejudice & Zombies, artist Oleg Medvedev has produced some covers for Italian variations on the theme. 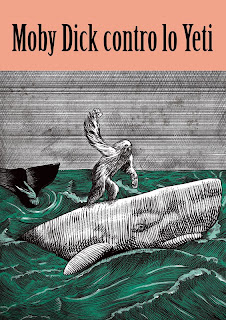 Any resemblance between the Yeti and Chewbacca is strictly coincidental, and should not be taken as encouragement to make Classics/Star-Wars mashups the next literary fad. 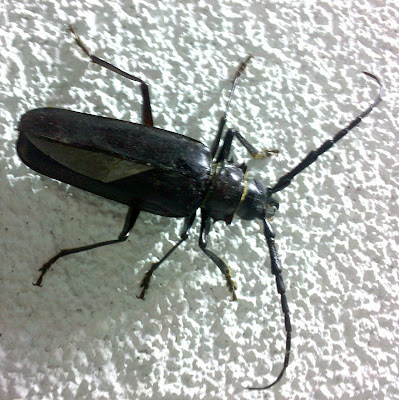 This is a beetle I snapped at work the other night. Actual size about two inches long.

I used the built-in camera on my new Droid cellphone, and I have to say I'm impressed that it was able to focus and capture that much detail at a distance of several inches away.

Posted by Bruce at 7/13/2010 10:02:00 AM No comments: Links to this post
Email ThisBlogThis!Share to TwitterShare to FacebookShare to Pinterest

TILT -- offering a slanted perspective on life. (Click "Project Info" at the top of the page for rights information.)

Both the above come from the BeHance Network, a website for artists to display their portfolios and projects. Great stuff there.


Unsolicited plug: One of our own favorite artists is Sandra SanTara, from whom we've bought a lot of prints and t-shirts, both for ourselves and as gifts for friends & family. Her website is Windwolf Studio. (Image use restricted, or I'd include a sample here.)


And moving from the sublime to the ridiculous: Fellowship of the Vuvuzelas

Posted by Bruce at 7/08/2010 12:24:00 PM No comments: Links to this post
Email ThisBlogThis!Share to TwitterShare to FacebookShare to Pinterest
Newer Posts Older Posts Home
Subscribe to: Posts (Atom)