Hugos and Rockets and The Chain of Connection

The official Hugo Awards site describes the design of the award as having been "based upon the hood ornament from a 1950s American automobile."  They don't give a specific make or model, but I'll wager that the inspiration came from the Oldsmobile 88, aka the "Rocket 88".  There were variant versions of the hood ornament from year to year before the first Hugos were given in 1953, but the version used in advertising that preceded Oldsmobile's public introduction of the 88 line a few years before that makes, I think, a pretty irrefutable argument.

I came across this image, and others on the vintage site linked above, because I was making notes for a future story where I wanted a young woman traveling in an old car, and I wanted a car whose name would both trigger a science-fictiony association and be "a man's car".  The Rocket 88 fit the bill pretty well; it was one of the first cars with a V-8 engine and other power embellishments, and is now regarded as an early outlier for the "muscle cars" from other makers that started coming on market in the mid-1950's.  But I did a double-take when I did an image search and saw some pictures of the 1950 "fastback" model of the Olds 88.

My grandfather died when I was in sixth grade, I think in late 1963, and I had never remembered him as anything other than as a frail old man and, in his last several months, a dying old man.  So it was a bit of a shock to realize that Grandpa might have been driving a muscle-car all those years.  My grandfather as a bad-ass?  As a tough guy?  Hard to picture.  Even in older family photos, he was thin and non-intimidating, not the type of person you'd expect to see in a fight, not the type of person you'd want on your side in a fight.

Or maybe you would.  Because there was one family story I heard from my mother decades after Grandpa had died, only once, and only in very brief form.  Probably because it was, at heart, a pretty ugly and very discomforting story.  But it showed that when someone tried to harm his children, my grandfather -- and a length of wooden broom handle -- was capable of cold-blooded and deliberate violence.

(I was actually planning on using this family story, with a number of changes and expansions, as the basis for the next story on my "to-write" list.)

So maybe my grandfather really was, or had been, a bad-ass tough guy.  And maybe, on those times when I rode in Grandpa's car to the store or other relatives' homes, I was riding with a Hugo on the hood!  Probably the closest I ever got to a Hugo.

(Although I was told, back in the 1970's when fandom was a lot smaller and I was a much more active fanzine publisher and letterhack, that I'd once come within a few nominations of being on a Hugo ballot for Best Fan Writer one year.  But "within a few nominations" probably doesn't count for much, then or now.)

Posted by Bruce at 3/27/2014 10:12:00 AM No comments: Links to this post
Email ThisBlogThis!Share to TwitterShare to FacebookShare to Pinterest 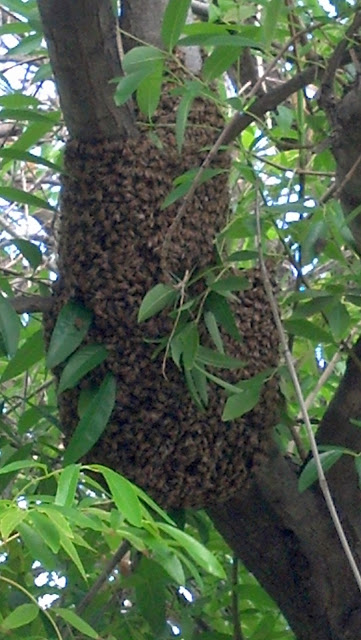 The ash tree in our front yard got colonized by a bee swarm yesterday afternoon.  I don't particularly freak out about bees or even bee swarms, but the assemblage was hanging almost over the public sidewalk and I thought the rest of the neighborhood might object.  I was also a little worried that some of the young neighborhood kids might decide to do the Rock Test on the swarm.  (Rock Test, as I recall it from my own misspent youth: "There's something unusual over there.  Let's throw a rock at it and see what happens.")

I was hoping the swarm would decide to move on after a night's rest, but no such luck.  So I had a bee service come out to remove it earlier today.  Sorry, bees.
Posted by Bruce at 3/14/2014 10:36:00 AM No comments: Links to this post
Email ThisBlogThis!Share to TwitterShare to FacebookShare to Pinterest

Brass Brassieres: The Cliche That Will Not Die


So, back in the early days of science fiction, pulp magazines tended to feature garish covers with bug-eyed monsters, phallic spaceships, and -- especially on a magazine called STARTLING STORIES -- skimpily dressed spacewomen whose most striking feature tended to be the brass metal brassieres they wore. Yes, metal. As in cold, hard metal. 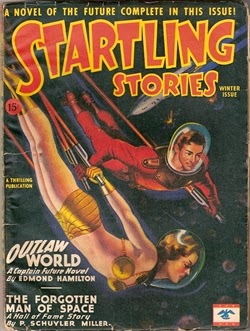 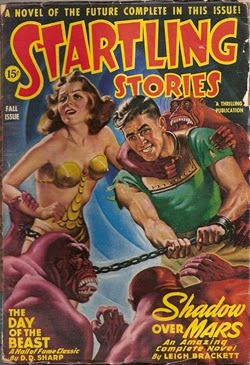 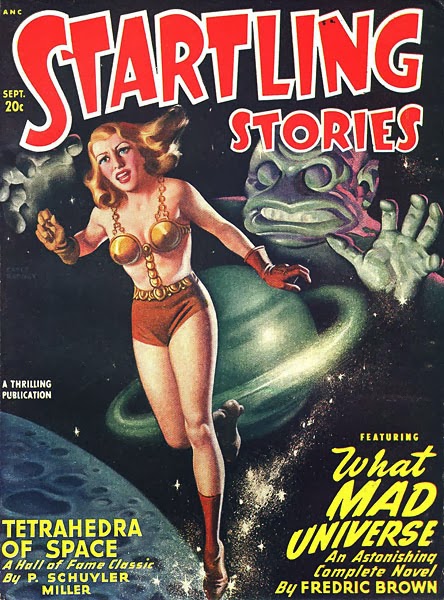 
That particular trope, memorable as it was (and it was used by critics as an example of science-fiction's essential juvenile/puerile nature for decades), faded away after awhile.  It sometimes appeared on "women warrior" covers for fantasy novels, though that seems to have dropped in frequency as well.  A few notable exceptions include the "Slave Girl Leia" costume from RETURN OF THE JEDI (but then, the whole Star Wars Trilogy -- There can be only one! There was only one! -- was a callback/homage to the old SF pulps), and, in a slightly different design, the ludicrous chain mail bikini worn by Marvel Comics' version of Red Sonja.  (There are also the occasional form-fitting spacesuits or power-armor, but at least they're not bare skin in space!)

So we can all breathe a sigh of relief that the "brass brassiere" cliche has, for the most part, vanished into the dustbin of history.  Right?

Well, not quite.  The BBC television series Da Vinci's Demons (shown on the Starz cable channel in the US) recently put out some publicity stills for the show's second season: 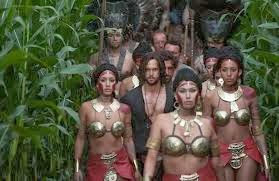 It's official: Brass brassieres are back!

From what I've read about Da Vinci's Demons, the show's first season played a bit fast and loose with historical timelines regarding what happened when, or with the lifespans of various historical characters. (One character depicted as being alive to interact with Da Vinci died, in real life, about thirteen years earlier.)  But they weren't egregiously anhistorical.

For the second season, it sounds like the show's writers are now turning more towards the Holy-Shit-These-Are-GREAT-Drugs! scriptwriting model made popular by ABC's Sleepy Hollow, wherein the historical record is turned inside-out, dressed up in a tutu, and painted in day-glo colors.  (See: Zombie George Washington.) Da Vinci will discover the Americas and have a run-in with the Incan Empire.  Yes, really. One assumes from the photo above that the brass-brassiered beauties are supposed to be the legendary Amazons, or that Da Vinci stumbled onto an Incan fashion-model photo shoot, or, oh fuck, I have no fucking idea what the fuck is going on in that photo, just that it makes me go "GHAAA! MAKE IT STOP, MAKE IT STOP!"

Posted by Bruce at 3/05/2014 03:39:00 AM No comments: Links to this post
Email ThisBlogThis!Share to TwitterShare to FacebookShare to Pinterest
Labels: art, cliches. Da Vinci's Demons, pulps, science fiction

Wonderella On The Writer's Life

I try to follow a Twitter-avoidance policy (because timesink), but Wonderella is one of the few exceptions:


The 50 Shades of Grey series has sold 100 million copies, in case any authors out there needed a reason to drink on a Thursday

Posted by Bruce at 3/02/2014 01:39:00 PM No comments: Links to this post
Email ThisBlogThis!Share to TwitterShare to FacebookShare to Pinterest

Joyce Carol Oates has been turning out novels and short stories on a prolific basis for decades, frequently enough that she's been criticized for writing too quickly, while at the same time being highly regarded in literary circles.  Somehow, except for a few short stories, I'd never read any of her work until recently.

A Bloodsmoor Romance was first published in 1982 and is part of the "Gothic Quintet" (concluded in the recent The Accursed).  Judging from some of the reviews I've read, it has a reputation as a "black sheep" among Oates' work, with irregular and inconsistent plotting and narrative.

I can see where those opinions are coming from.  But I can also see, I think, what Oates was trying to accomplish with the book, not always successfully.  There were moments when I absolutely loved what I was reading, and also moments when I was definitely going "WTF?"  So my reaction is as mixed and inconsistent as the actual book is.  ABR is kind of a mess, but it's a "hot mess".

From The Urban Dictionary:

No one set of guidelines can perpetually determine what distinguishes a "hot mess" from an above-average train wreck. Regardless of the circumstances, you know it when you see it; because they are typically conspicuous, and obviously they are always awesome.

Basics: In late 19th-century America (1879-1899), the Zinn sisters (Constance Philippa, Malvinia, Octavia, Samantha, and the adopted orphan Deidre) are the children of a gifted but irresponsible inventor who fortunately married into a wealthy Pennsylvania family, the Kiddemasters.  Though the backstories of John Quincy Zinn and Prudence Kiddemaster are told in flashbacks, the five sisters' stories are the main narrative. The initiating incident of the book is when Deidre, the youngest sister, is abducted by an unidentified balloonist in a sinister black balloon.

The stories of the five sisters are told by an unnamed female person of the same period and mores.  The Victorian repression and denial of sexuality is paramount in the narrator's voice, augmented by a cloying American fundamentalism.  Since much of the book deals with the sisters' actions in contradiction with those social codes and mores, there is much expression of disapproval from the narrator, couched in florid Victorian prose.

But, by God, it's great use of overblown prose.  Particularly in the early parts of the book, the rhythm and pace of the narrative is almost like poetry.  There were sections I wanted to read out loud.  I would have loved to hear this book done as an audiobook.

Also, there are parts of this book that are just plain goddamned funny.  "Goofball" isn't a term one usually finds applied to Oates, but for this one particular book she seems to have let her inner-goofball out at points.

Read more »
Posted by Bruce at 3/01/2014 02:44:00 PM No comments: Links to this post
Email ThisBlogThis!Share to TwitterShare to FacebookShare to Pinterest
Newer Posts Older Posts Home
Subscribe to: Posts (Atom)