How To Blow A Trial

One of the news stories on the current Enron trial relates that the judge in charge told prospective jurors not to seek "vengeance":

More than 100 jurors packed a cavernous courtroom to undergo questioning by U.S. District Judge Sim Lake, who has said he plans to seat a panel of 12 jurors and four alternates by day's end. If he succeeds, the long-awaited trial of Enron's former top two corporate titans will get under way Tuesday.
...

Lake told the pool that the jury box was no place for anyone seeking vengeance.

"We are not looking for people who want to right a wrong or provide remedies for those who suffered from the collapse of Enron," he said.

Whatever the results of the trial, Judge Lake has given the Enron defense attorneys grounds for appealing the trial or asking for a mistrial.

Howcum? Because it can be argued that by raising the issue of "right[ing] a wrong", Judge Lake implied that Lay and Skilling, the defendants, were guilty. This violates the "presumption of innocence" standard, and will in all probability end up with the trial results eventually being thrown out and a whole new trial [perhaps] being called for.

Thanks a lot, dumbass.

(If I were really really cynical, I'd want to see if Judge Lake's bank account had a BFD -- Big Fat Deposit -- made recently.)
Posted by Bruce at 1/30/2006 10:10:00 PM 1 comment: Links to this post
Email ThisBlogThis!Share to TwitterShare to FacebookShare to Pinterest

It's been a few months since I've had a chance to participate in the sort-of monthly Is My Blog Burning? food-blogging events. (A "Beginner's Guide To Food-Blogging Events" is included at the IMBB food-blogging-event news-site.)

The latest theme for IMBB is "Noodles", hosted by Cooking With Amy.

I've been down with a bad cold for most of the weekend, so if I was going to do an entry for the IMBB, I wanted it to:

1) use the "Noodles" theme,
2) be spicy to help clear my sinuses, and
3) be simple, since my attention span/energy level isn't at its best right now. 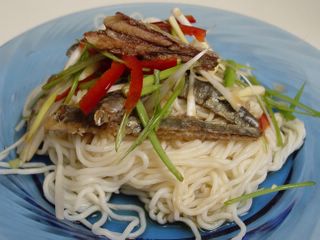 Drain the packet of noodles. (They come packed in liquid, and have a noticeable fishy odor.) Parboil the noodles about 3 minutes in fresh boiling water. (This removes the fishy odor.) Drain.

On top of the hot noodles, arrange chunks of the spicy sardines. Scatter the threads of onion and pepper over the top. Add potsticker sauce to taste.


This came out quite well, considering it was pretty much improvised. The sweetness of the potsticker sauce made an interesting combination with the spiciness of the sardines. If you wanted it even spicier, you could dribble a bit of the chili-infused oil from the sardine can over the noodles.

If I'd felt better, I might have gone to a bit more trouble and made a from-scratch sauce in place of the bottled potsticker sauce. (A vinegar sauce would have been tasty.) But this was quick, easy, and rather good.

Update, 1/31/06: The roundup of links to the submitting blogs and recipes is now posted to Amy's blog.

Posted by Bruce at 1/29/2006 12:43:00 PM No comments: Links to this post
Email ThisBlogThis!Share to TwitterShare to FacebookShare to Pinterest

But this recent photo of the New Horizons launch to Pluto is especially outstanding. The photographer,Ben Cooper, not only had to work with a changing, dynamic scene, but frame those changing elements into a well-composed photo. Kudos.

This would make a wonderful poster. Or it may end up as the default wallpaper on my monitor. 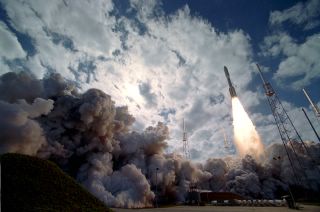 The full-size photo is here. The APOD archive is here.
Posted by Bruce at 1/24/2006 06:35:00 PM No comments: Links to this post
Email ThisBlogThis!Share to TwitterShare to FacebookShare to Pinterest

If you ever watch old movies about the Civil War, or read old books about the period, one of the standard cliches of the genre is the Army medical tent where the surgeon, in blood-spattered apron, saws off arms and legs as the wounded flood in. And the anesthesia given to the wounded before the cutting starts is... whiskey. Lots of whiskey, sometimes from a tin cup, sometimes poured straight from bottle to mouth.

I got called out on a Good Samaritan run the other night, to drive a drunken young man home.

This young man, who doesn't like the taste of most liquor, and who rarely drinks at all, had -- in a short period of time -- drunk six ounces of Jack Daniels and a shot of vodka. He was, in a word, stinkin'.

He had, earlier in the night, managed to dislocate his shoulder, and efforts to reseat it had not availed.

If this had been my own situation, my next step would have been to go to an emergency room. At the ER, I would have been given a shot of muscle relaxant and some pain-killers, then had the shoulder reseated by the doctor. There would probably have been some x-rays somewhere in there, too.

But I could have gone that route because 1) I have a good job, with decent pay and good medical insurance, and 2) I have money in savings that would have enabled me to cover out-of-pocket expenses.

This particular young man is one of the Working Poor. But not poor enough, or in desperate enough straits, to qualify for welfare. He's been working dead-end jobs for years, living from paycheck to paycheck, and watching any savings he's managed to scrape together get wiped out repeatedly by unexpected expenses. And he'd already, in the last few months, been to the ER once.

When you're one of the Working Poor, even if you have some medical insurance, you can only afford so much medical care. You can afford (barely) to go to the ER. Once.

You can't afford to go twice.

So you make yourself get snockered, plastered, smashed, drunker than you've ever been in your life. And when you're drunk enough that your legs won't hold you up anymore, your girlfriend (with some telephone guidance from a friend with first-aid training) is finally able to twist your arm back into its shoulder socket.

Here we are, in the 21st Century, and people are still practicing -- have to practice -- 19th Century medicine on themselves.

It makes me ashamed of my country.
Posted by Bruce at 1/22/2006 07:57:00 PM No comments: Links to this post
Email ThisBlogThis!Share to TwitterShare to FacebookShare to Pinterest

The Sinister Butt of Hugh Jackman

I just realized today that our friend Anne's calls to her friend in England may have been among the international calls monitored by the NSA.

I now have a mental image of an NSA analyst with a puzzled expression turning to another analyst and saying, "These two women are talking about Hugh Jackman's butt. Do you think that could be code for something sinister?"
Posted by Bruce at 1/19/2006 11:37:00 AM 1 comment: Links to this post
Email ThisBlogThis!Share to TwitterShare to FacebookShare to Pinterest

The inside article is about a local group of balloon-twisting artists. Not your ordinary one-minute balloon-doggies and balloon-swords anymore, but large elaborate projects that take hours of work, and sometimes several people, to create. Besides the cocktail dress, one of the photos features a full-sized motorcycle that would make American Chopper green with envy.

Interesting piece. Take a look.
Posted by Bruce at 1/13/2006 06:31:00 AM No comments: Links to this post
Email ThisBlogThis!Share to TwitterShare to FacebookShare to Pinterest

The 2005 Photo Contest winnersfrom the National Wildlife Federation. Sample below: 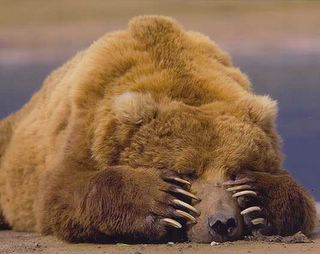 Posted by Bruce at 1/01/2006 05:28:00 PM No comments: Links to this post
Email ThisBlogThis!Share to TwitterShare to FacebookShare to Pinterest
Newer Posts Older Posts Home
Subscribe to: Posts (Atom)