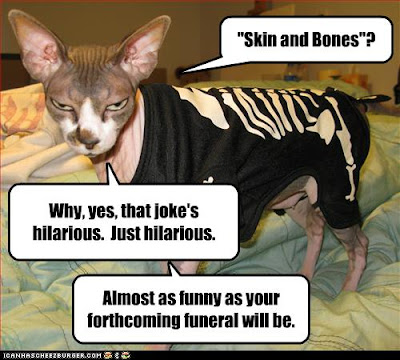 I have a long, long to-do list, including some pretty urgent stuff... so of course I decided to take a quick look at Undulant Fever instead, maybe make another apologetic post about not posting.

So, browsing the list of old posts, I saw one whose title I didn't remember. But it had more than the usual number of comments. So I click on it, and...

A couple years ago, I got into a short dustup on another person's blog. My fault; I should have resisted the impulse to express my surprise that two people I despise and wouldn't trust as dogcatchers had managed to do an adequate job on a major project. Hot blog posts ensued, until the blog's host told all of us to knock it the hell off. Hot e-mails ensued for a while.

What I didn't realize was that in addition to the emails, several of the people involved reacted to the dustup on that other blog by posting comments on this blog.

They posted their comments on the most recent UF entry at that time... which happened to be one of the most frivolous posts I've made, and one I paid little attention to after posting.

My Blogger settings are marked to notify me by email whenever a comment is posted. This sees to work only intermittently. So in this case, I never got the notifications from Blogger, and today's the first time I've seen those comments.

Backtrack to this year's Westercon: One of the people there was someone I had not had a face-to-face conversation with for more than thirty years. That previous conversation hadn't gone so well ("Go to hell" was said, among other things), and I wasn't sure if I was going to slapped, kneed, or presented with a restraining order.

As it turned out, she greeted me warmly, and we had a short but cordial conversation. In the course of which, she said something that surprised me: During that dustup two years ago, one of the people upset with me had sent a copy of an email I'd sent him to this person, I guess to demonstrate what a horrible person I am, and informed me he'd sent it to her and to several other people. (I'd said, in the email, that he was fucked up in the head, needed professional counseling, and was a lousy husband and father. For some reason, he took this personally and got upset.)

I'd never seen a reaction from her about that email and was surprised, when I mentioned it, at what she said: She had no idea what I was talking about. She had never received or read the email in question.

This isn't the first time this sort of thing has happened over the years. Letters sent never get received, emails don't arrive in inboxes, words put on public display are never seen by the person they're meant for or about.

I mention this because I had an uncharitable thought when she told me she'd never read the email: Has she really not read the email, or is she just saying that she never got the email? (Saying that she hadn't, even if she had, would give her a lot more control over the direction of our conversation, something she's always been very good at and at which I have no skill whatsoever.)

Finding those never-read comments on an old, unrelated post sets me back a bit. Perhaps an apology is in order for that uncharitable thought.

I'd like to have a tightly plotted narrative to my life. There's be no loose ends, no missed connections, everyone would know their lines in the script: everything would make sense. I want to be my own omniscient narrator.

Sometimes life is just a Drunkard's Walk. With blindfolds.

I think I'll just leave those old comments in place, and not make a two-years-later response. You could probably find them if you want to make the effort, tho' I suspect the most likely response would be "WTF is that about?")
Posted by Bruce at 10/07/2009 01:50:00 PM No comments: Links to this post
Email ThisBlogThis!Share to TwitterShare to FacebookShare to Pinterest
Newer Posts Older Posts Home
Subscribe to: Posts (Atom)