TusCon, where we went last weekend, is a small but friendly SF convention held each year in, duh, Tucson. We tend to see and catch up with old friends there. 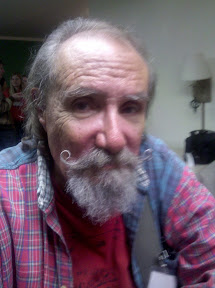 This is Curt Stubbs, from back in the way early days (the 70's) of Phoenix fandom. Curt moved to Tucson in the 80's. Besides the latest year's worth of medical problems to report, Curt had the better news that he'd been working on poetry again, and had read a piece on local radio.

He also has an awesome beard, the bastard. (Not that I'm BITTER, y'know, or OBSESSIVE, y'know, about having to stay clean-shaven for work the last few years.)


We also saw Jennifer Roberson again for the first time in a few years. Jennifer had moved to Tucson since we'd last spoke, and was multitasking, hitting both TusCon in her career as an SF/Fantasy writer, and a major dog show in her capacity as a Corgi breeder.  This is Jennifer with Gabby, one of her newest Corgis: 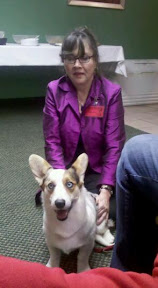 Gabby was named after Gabrielle Giffords, being born a week after the shooting last January.  In evidence that Everything Is Connected, Curt had been in hospital (a MRSA infection in his foot) the day of the shooting, and was one of the ICU patients hurriedly transferred to a regular ward to make room for some of the shooting victims.

We also saw Tom Watson, for the first time in about twenty years, at TusCon.  Tom had been one of the members of a writers' workshop back in the 80's, along with Jennifer, Hilde and me, Mike Stackpole, and Liz Danforth.  He's gotten back to writing again (unemployment can do that to you), which is good.   (Tom was, I think, the member of the workshop who was actually making the steadiest income from writing at the time, but it was non-fiction for pet industry trade journals.)

I was struck, at TusCon, both by how many young people (late teens, early 20's) were in attendance, and by how our own generation of fans is (phrasing it politely) "greying".  Curt was using a walker, Jim Webbert was using a walker, and Jan Lockett was not only using a walker but had a litany of health issues and crisises from this last year that had us amazed she was still alive.  (She actually came to the convention from the rehab hospital where she's still recovering from the latest crisis.)  Made Hilde and me feel we've been pretty lucky this last year.  (Although the con suite had a large mirror on one wall, and I kept being taken aback when I kept seeing an Old Guy looking back at me whenever my eyes drifted in that direction.)
Posted by Bruce at 11/20/2011 02:53:00 PM 1 comment:
Email ThisBlogThis!Share to TwitterShare to FacebookShare to Pinterest

After Gremlin's death earlier this year, we started looking into the possibility of getting another Siamese. So we stopped in Casa Grande on our way to TusCon Friday where the very nice woman who operates Siam Moon Cattery showed us her newest purchase-ready litter. We'd already seen photos of the litter's kittens online, so our stop was to decide which of the two male Sealpoints we would pick. This little guy turned out to be the one; we picked him up Sunday on our way home. We've already named him Tyr. 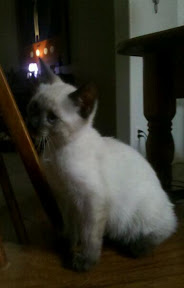 Posted by Bruce at 11/14/2011 02:41:00 AM No comments:
Email ThisBlogThis!Share to TwitterShare to FacebookShare to Pinterest

I got asked last weekend to do a fill-in shift at a different property from where I usually do Security work. So I ended up working Saturday afternoon and evening at Cityscape, a fancy new office & shopping development smack in the heart of downtown Phoenix.

(I usually try to avoid extra shifts, but the Security Director at Cityscape had been an easy-to-get-along-with Acting Director at my workplace for a while, and someone walking out on him at Cityscape without warning put him in a bind to fill the shift.  So, hey.) (The extra pay will also make up for the day's work I lost to my concussion-based ER visit a few weeks ago.)

Cityscape is very spiffy and upscale, part of the ongoing effort to refurbish and reinvigorate downtown Phoenix, which used to have the reputation for having no life beyond office workers at all, and for being dead, dead, deader-than-dead at night and on weekends.  At some of the early Phoenix SF conventions that were held at downtown hotels in the 1980's, the convention attendees pretty much had the downtown sidewalks to themselves for the weekend.  Definitely more lively now than then, though a large part of this is from the sports venues built downtown (basketball arena and baseball stadium), which definitely aren't my cup of tea.

But what actually piqued my interest the most working downtown was finding that Cityscape was built directly across the street from the Luhrs Tower.

The Luhrs Tower is a fabulous Art Deco building, one of the first skyscrapers built in Phoenix, back in 1929.  Here's an article on its history, and here's a photo:

Every time I've seen the Luhrs Tower, I've said to myself, "Cool.  Very, very cool."  At Cityscape, I saw the upper stories of the Luhrs showing themselves behind a section of the Cityscape structures.  I would have liked to have taken a photo from that viewpoint, because it would have contrasted the ornate richness of the Luhrs Tower with the relative blandness of Cityscape's buildings.  (They may be new, they may be spiffy and clean, but Cityscape, when you come down to it, is just another set of buildings from the "steel-&-glass" school of architecture.  Meh.)

(A photo of Cityscape is included in the set of High Dynamic Range photos of downtown Phoenix buildings where I found the Luhrs photo above.  Full article here.)

Unfortunately, even though I have a semi-adequate camera built into my cell phone, Cityscape is yet another place with one of those bothersome "no photography" policies.  And I didn't think it would be ethical to violate that policy while I was in uniform and supposed to be enforcing it.

(I like the part of Security work where I'm doing good deeds, helping people out, solving problems.  But part of the job sometimes feels like being a High School Hall Monitor, enforcing policies and rules that mostly just annoy people.  But the "no photography" rule is the one that has me scratching my head in puzzlement the most.  The developers spend millions and millions of dollars trying to make their properties photogenic, and then they say "no photos"?  Since I usually work graveyard shifts, I don't have to do it too often, but when I have to ask someone to not take or to stop taking photos, I feel embarassed and stupid.)