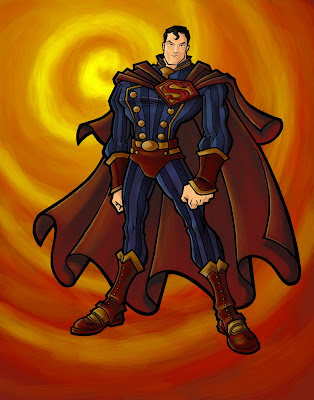 Project Rooftop is a comics/art blog dedicated, not to superhero comics writing or stories, and not to comics art per se, but specificially to superhero costume design. As such, they've run several competitions asking for costume re-designs on popular superheroes: Robin, Wonder Woman, Impulse, and most recently, the daddy of them all, Superman.

Drew Blom's steampunkish "Man of Steam", shown above, was one of the entries. Other entries can be found here and here. (The second link is for the "Honorable Mentions". I'm not the only person who thought some of the Honorable Mentions were as good as or better -- Drew Blom's entry ended up in the HM category -- than some of the winners in the first link.)

This is Seriously Cool Stuff, especially if you're an old comics fan (I bought the very first Spiderman story off the spinner rack at a local grocery; yes, I'm that old) and even if you're not.

(Who would I like to see Project Rooftop re-design? Easy choice: Adam Strange. I liked the character, but even as a kid I thought his costume looked, well, dumb. (C'mon, a fin on his head?)

Posted by Bruce at 7/24/2008 08:40:00 AM 2 comments:
Email ThisBlogThis!Share to TwitterShare to FacebookShare to Pinterest

Jesse Helms Did One Good Thing


Since Jesse Helms, the controversial former long-time Senator from NC, died a few days ago, I've seen numerous commentaries about his life, career, and views. Almost all negative.

Stephen Lemons, columnist for the local version of the NEW TIMES alternative newspaper, grew up in North Carolina. His online column response to Helms' death, "Tramp The Earth Down: The Unlikely Debt I Owe The Late Sen. Jesse Helms", is, I think, one of the best.

The section that sums it up:

I now realize, with the wisdom of a few more years, that I owe ol' Jesse a strange debt of gratitude. There are those raised in more enlightened climes that have never been exposed to such base, political villainy. I didn't enjoy that luxury. As a result, my antennae are acutely tuned to the malevolence, lies and smear-tactics of those who would use race, nationality and/or ethnicity as their bugbears. These individuals are common enough in Arizona, of course, save that here they're more concerned with brown instead of black skin.

I also learned from Helms' that the good fight is the one you win, and only the one you win. Metaphorically speaking, you need not become a snake in order to overcome the reptile. But you must overcome it, or suffer the consequences. Half-measures do not work against water moccasins like Helms. For teaching me that, I owe him one.

In short, the good that Jesse Helms did was to serve, publicly, as a Bad Example.

Posted by Bruce at 7/07/2008 11:56:00 AM No comments:
Email ThisBlogThis!Share to TwitterShare to FacebookShare to Pinterest

If this doesn't get me linked to Boing Boing, nothing will.