On 27 May 1940, the Dunkirk Evacuation began. British, French and Belgian forces had been surrounded and cut off by approaching German armies, in the area of Dunkirk in northern France. A combination of British and French warships, aided by hundreds of conscripted or volunteered civilian vessels, were able to evacuate over 300,000 troops to Britain over the course of eight days, from May 27th to June 4th, despite heavy bombing and strafing by German Luftwaffe planes.

Despite the heavy material losses (thousands of guns and vehicles, and over a half million tons of ammo, fuel, and supplies), the rescue of the majority of the British Expeditionary Force provided a major propaganda victory for the British, encouraging public support for the continuing fight against Germany's Nazi regime. The rescued forces also provided a core of trained and experienced men who were able to train new soldiers in the build-up to the eventual return to active combat against German forces.

The "Miracle at Dunkirk"has also provided inspiration for artistic and literary work since the event of 1940. The best known example of "Dunkirk Literature" is Paul Gallico's novella "The Snow Goose", published in 1941, and going up at least to Ian McEwan's 2001 novel ATONEMENT.

The 2014 anthology IN THE COMPANY OF SHERLOCK HOLMES: STORIES INSPIRED BY THE HOLMES CANON (edited by Laurie R. King & Leslie S. Klinger) includes "Dunkirk" by John Lescroart, presenting an aged Sherlock Homes (operating under his alternate identity of "Sigerson") joining one of the civilian vessels assisting in the Dunkirk evacuation. (Very good story, by the way, even without the Holmes connection.)

Posted by Bruce at 5/27/2016 08:02:00 PM No comments: Links to this post
Email ThisBlogThis!Share to TwitterShare to FacebookShare to Pinterest
Labels: Dunkirk, history, WW2, WWII

Out on the interstate highways, especially I-10, Arizona dust storms can spring up fast, going from this... 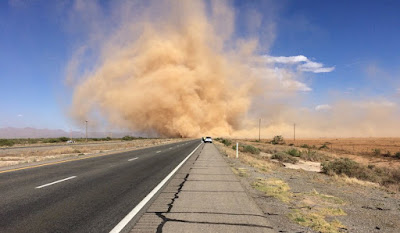 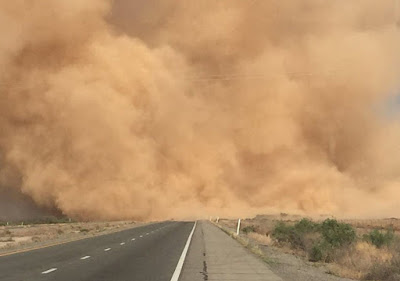 This particular storm was aggravated by moving across a freshly plowed field.

(Photos via Arizona Department of Public Safety. Somebody at DPS knows how to shoot... pictures.)
Posted by Bruce at 5/17/2016 08:15:00 PM No comments: Links to this post
Email ThisBlogThis!Share to TwitterShare to FacebookShare to Pinterest
Newer Posts Older Posts Home
Subscribe to: Posts (Atom)