Hansel Monday is the older Scottish version of England's Boxing Day. But I came across this poem by William Seath, large chunks of which seemed just as suitable for a Thanksgiving celebration. Hope you enjoy it.


"Dreary is the forest moaning
Neath dark Winter's angry blast,
But our festive board is groaning
With its load of rich repast.
Here now welcome friends surround us
Laughing gaily, chatting free;
Happy bairnies play around us
Dancing in their childish glee.
Away dull Care and gloomy Sadness
From the happy social throng;
Let us all amid our gladness,
Trip the dance and raise the song.

"Let us drink in boundless measure
From the bowl of pure Delight;
Let the lamp of sinless Pleasure
Light the gloom of Sorrow's night;
Tighten up the bands that bind us
To our friends while we are here,
For to-morrow's sun may find us
Slumb'ring on the silent bier.
Away dull Care and gloomy Sadness
From the happy, social throng
Let us all, amid our gladness,
Trip the dance and raise the song."

from Rhymes and Lyrics, by William Seath, 1897. 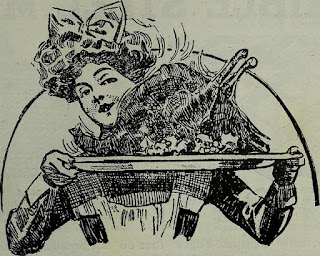 Posted by Bruce at 11/26/2015 03:04:00 AM No comments: Links to this post
Email ThisBlogThis!Share to TwitterShare to FacebookShare to Pinterest

That's my explanation for the paucity of recent posts, and I'm sticking to it.

No, really, I've been doing stuff. Some worth doing, some not.

I've been trying to catch up on some of the stuff on my To-Do List. When the number of items on your TDL is getting close to the number of books in your TBR pile, that's... not good. So I've been whittling back on some of the items that have been gathering dust on the TDL for too long. I've made a dent.

Of course, a TDL is an active, living thing that, like the Incredible Hulk, get larger and meaner when you're not paying attention. Which inspired this: 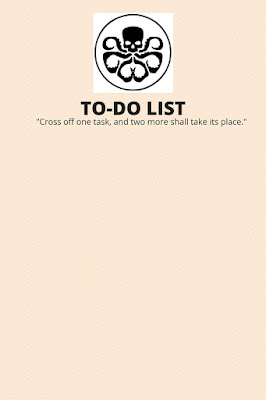 Feel free to copy and print off for your own use.

Also had more medical appointments than has been usual for a while. And things. And other things. ("Round up the usual excuses!")

Hilde and I went to the annual TusCon convention in Tucson the last weekend in October. Discovered I'm continuing to get older. (How does that keep happening?!) Packing, travelling, atttending, re-packing, travelling, and unpacking was more wearying and energy-depleting than I'd expected.

It didn't help that trying to sleep Friday night/Saturday morning turned out to be craptastic for both of us. For Hilde because in trying to get to bed in an unusual place, some of the sleeping medication she takes got spaced by both of us, and didn't realize that was the cause until hours of tossing and turning later. I had trouble because 1) I'd taken one of my anti-drowsy meds before the drive down from Phoenix, and it hadn't completely washed out of my system, and 2) I discovered from the program book that one of the Old Guard in Tucson fandom has passed away last April. (That kinda drove in how out-of-the-loop Hilde and I have gotten over the years; once upon a time, we'd have heard about it almost immediately. The local fannish newszine, Connotations, shut down a while back, and I haven't found a suitable replacement; it would almost certainly have carried the news to us faster.)

The deceased person played a pretty important role in The Worldcon That Must Not Be Named. (People get upset when I tell some of the many unpleasant truths about those times.) She was not one of the major initiators of the fanpolitics of that convention, which were brutal, ugly and stupid; she was one of the people who did their job, and got genuinely Screwed Over by a group of those major initiators as her reward. Even after nearly four decades, memories of that Worldcon are upsetting enough I had a hard time getting more than a few hours sleep that night at TusCon. (At least I didn't have actual nightmares about TWTMNBN like I used to.)

(I may write more about this later. Probably not a good idea, but I might anyway.)

At any rate, by the time Hilde and I finally got to sleep Saturday morning, we didn't wake up until mid-afternoon, then several more hours to eat, wash, dress, etc., so it was about five o'clock when we finally got out of our room. Effectively, we'd missed almost an entire day of TusCon. Since we had to leave early Sunday afternoon (I had to get back to Phoenix for one of my 12-hour shifts at work that night), we had a pretty minimal convention. But we met with old friend Curt Stubbs and had dinner with him, and touched base with some of the other long-time attendees at TusCon. It's a convention we always enjoy; I wish we'd been able to spend more actual time at the convention, instead of just at the hotel.

(I was also glad to hear TusCon will be moving to a new hotel next year. The current hotel's been the site for about fifteen years, but predates the Americans with Disabilities Act; several of the meeting rooms used for TusCon's panels and other functions are only accessible via a long steep staircase in the lobby; kind of a problem for a wheelchair-user like Hilde. We were told the new hotel next year will be fully accessible. Yay!)

One of the other things taking up a bit of time has been trying to spend more time on my fiction writing. I decided to do a kind "Semi-Nano" this November. Rather than trying to reach that 50,000 word goal of a traditional Nanowrimo, I'm just trying to move from my weekly/occasional writing sessions to a short-but-daily session of about 30 minutes. Succeeding fairly well so far, except for the weekends when I'm working those 12-hour shifts (eat, sleep, work; not much else is possible on those days); I try to make up for that lack with longer sessions on Fridays and Mondays. Averaging about 300-400 words per half-hour session, which adds up to about double the wordcount I'd been producing before. I'll have to see if I can continue the practice into December and beyond.

I've been meaning to do more book reviews here. Stay tuned.
Posted by Bruce at 11/12/2015 11:16:00 AM No comments: Links to this post
Email ThisBlogThis!Share to TwitterShare to FacebookShare to Pinterest

Our Headless Cat, and other recent photos


Posted by Bruce at 11/12/2015 09:41:00 AM No comments: Links to this post
Email ThisBlogThis!Share to TwitterShare to FacebookShare to Pinterest
Newer Posts Older Posts Home
Subscribe to: Posts (Atom)