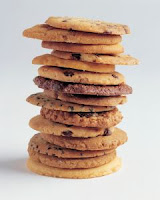 For more than two decades, Earlene McDonald and her neighborhood friends have baked cookies to raise dough for their central Phoenix neighborhood.

They cooked thousands of rum balls, rows of gingerbread and loads of other Christmas treats to sell to the crowds at the annual holiday home tour in the F.Q. Story Historic District.

And, until this year, they did it all in the comfortable, familiar settings of their own kitchens.

The tradition changed after a visit last year by a Maricopa County health inspector who said she would snatch up the cookies because they weren't prepared in a kitchen approved by the county.

So, instead of mixing and measuring in their own homes, they gathered one night this week to bake away inside the gigantic kitchen of a professional catering company.

"Last year, (an inspector) was going to have us throw them away, and I about had a heart attack," said McDonald, 68, who is in charge of the neighborhood cookie operation. "This is a tradition. All our neighbors love it."

Not a new requirement
The guidelines have been on the books for decades and are meant to prevent contamination and food-borne illnesses such as hepatitis.

The rules call for all food that is sold or given away [emphasis added] to be prepared and packaged in a central location, such as restaurants or school cafeterias, that are regulated and inspected by county health inspectors. More neighborhood groups, such as the residents of F.Q. Story, are borrowing or renting kitchens to comply with the rules.

But for years, many neighborhood, school and civic groups have flown under the health-code radar, officials said, partly because they're unaware of the rules.

Also, it's tough for health inspectors to keep track of the many fund-raisers that pop up in neighborhoods throughout the year.

School requirements
Some Valley school districts have written formal policies that require parents to bring in labeled store-bought cupcakes, cookies and other goodies, though parents often cheat and bring in homemade treats packaged in bakery boxes.

No reports of illnesses from bake sales have been filed with environmental services [emphasis added], said David Ludwig, division manager for the Environmental Health Division.

Officials could not provide figures on how many citations they have issued to neighborhood groups for breaking the guidelines, he said, because they don't track citations by types of events.

Typically, health inspectors would issue a warning before they wrote a citation, Ludwig said. Fines can amount to hundreds of dollars.

Cookies are generally low-risk because bacteria are not likely to multiply as quickly as they do with "potentially hazardous foods" such as tamales, eclairs, cream puffs and pies. Still, it's a concern in this age of contamination.

"Mom might bake a great batch of cookies, but if she has an egg-based cookie and doesn't cook it to the proper temperature, you could get salmonella," Ludwig said.

"If you were out there selling Rice Krispy treats and they were not wrapped, we'd ask you to cease and desist."

Shorter Health Department: "You people are pigs! Your kitchens are cesspools! You're trying to poison your friends and neighbors!"

Criminy. Strictly interpreted, the Health Department's regulations would mean that potlucks, bake sales, church socials, possibly even taking a dish to a family Thanksgiving, are all illegal.

The underlying default assumption behind the HD's actions is that home kitchens are inherently unhealthy.

I kinda resent that. Considering that e. coli infections from restaurants are reported on a semi-regular basis, eating professionally prepared foods hardly seems risk-free. (The worst -- actually, only -- case of food poisoning I had came from a dim sum restaurant in Los Angeles; by the time I got home to Phoenix the next day, I was doing the double-ended chunder and came close to ending up in the hospital.)

This calls for a bumper sticker: