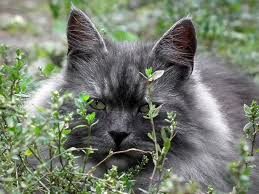 I’ve told this story in a few other places, but don’t think I’ve told it here:
Back in the early 80’s, our alpha cat was a big grey fluffy male who had been a stray around our first house. (Walked up and introduced himself: “Hey, you! Wanna house and feed the World’s Best Cat? Here I am.”) We usually try to keep our cats as indoor-only, but having lived on the street for a while, he insisted on occasional outdoor strolls.
We’d had him a few years, and had moved to a different neighborhood and house. One Sunday morning, as I was driving Hilde and our young son Chris to church, about a block away Hilde and I saw… a large grey fluffy cat, lying dead in the street with his head badly crushed.
Hilde and I exchanged looks as we drove slowly by, but didn’t want to upset Chris before church. So I drove them to church, then came back, retrieved the body, took it home, and buried it in the back yard, with a lot of tears. (He may not have been THE World’s Best Cat, but he was a contender.)
After Hilde and Chris got back home, we broke the news to Chris. More tears, more sadness.
We felt down all day, but had some out-of-town friends scheduled to visit that evening, so we bucked up and tried to put a good face for the visit, not mentioning the loss.
After dinner and chat, we took our visitors out on the back porch to see the hot tub we’d recently purchased. After a few moments, one of the visitors looked down into the shadows by the hot tub and said, “Oh, did one of your cats slip out with us?”
We looked down and saw… a large grey fluffy male cat. The same one we’d believed dead all day. The cat looked back up and meowed. (“Where’s my food?”)
We, of course, were overjoyed to see him so unexpectedly alive. Hugs and pets ensued. (Cat: “Whatever. Food?”) Then I realized…
…I had buried someone else’s cat.
Never found out where the dead lookalike cat had come from. Even now, decades later, I feel a bit guilty that somewhere a family’s cat disappeared and never came back, and they never found out what had happened to it.
But the punchline to our cat returning from the dead?
Our cat was named Aslan.

(Copied this from a recent comment I left on File 770. Aslan lived to be nearly 20 before he passed away for real. The pic above is from a free-image site; not the original Aslan, but pretty similar.)
Posted by Bruce at 10/13/2017 06:34:00 PM No comments: Links to this post
Email ThisBlogThis!Share to TwitterShare to FacebookShare to Pinterest

Book Review: THE SERVICE OF THE DEAD, Candace Robb

The Service of the Dead, Candace Robb (Pegasus Books, 2016)

Historical mystery, first in a new series set at the end of the 14th Century, during the struggle over whether the rightful king should be Richard II or Henry Bolingbroke.

Protagonist is Kate Clifford, a young widow in York struggling to continue her late husband's business and also renting several properties as guesthouses. An unexpected part of her husband's estate turns out to be two children by a secret French mistress, orphaned after their mother's own death; Marie and Philippe are left almost literally at Kate's doorstep. Kate also has to deal with servants, retainers, and various relatives, some trustworthy, some not. And some taking part in the political turmoil between Richard II and Bolingbroke, though choosing any side at all was a dangerous choice.

When a murdered man is discovered in one of Kate's guesthouses, a deadly game begins, as Kate tries to determine the man's turn identity and loyalties, and in how much danger that truth will place her. More murders will occur before that truth is found.

Kate, as a character, grew slowly for me, and early chapters felt slow as a result. As more of Kate's own backstory is revealed -- she was sent south into an English marriage to protect her from a Hatfields/McCoys-type feud on the Scottish borders where she was raised, even though she is herself skilled with knife and bow and axe -- she became more interesting, and the book more enjoyable.

In some ways, this book feels almost like a prequel, introducing and setting up the gameboard and pieces that will be played in future volumes. (The second book in the series, A Twisted Vengeance, is out.) That setting-up process felt slow in the beginning, but sped up satisfactorily by the end. I'll give it four stars out of five.

(Won in a Goodreads Giveaway.)
Posted by Bruce at 6/22/2017 05:06:00 AM No comments: Links to this post
Email ThisBlogThis!Share to TwitterShare to FacebookShare to Pinterest

"Of all the demons in hell, there is none I dread more than Revision." -- A. Everett Beek


So, been working on a new story. Usually, when I'm writing fiction, I've got a moderately good plot-line planned out in my head. Not quite an outline, but at least a cocktail-napkin style sketch of how a story will progress.

This time, though, I started out with a particular scene, with no clear idea of backstory, present story, or where the story was going. This sort of thing is usually described as a "discovery" story, or as "writing by the seat of your pants" (aka "pantsing"). With that technique, you just start writing and free associating and see where the story takes you.

Sometimes that works out well. And sometimes....

I'm about five thousand words into the story, and what I'm discovering is that the story seems to be developing more and more problems the further I go with it. As in:


In short, I'm not happy with the work I've put into the story so far.

So I'm wrestling with the question of whether I should try and continue to move forward on this particular story, or just abandon it*, or go back to the beginning and try to revise and rescue what I've written so far.

The Conventional Wisdom says "Finish what you've started." But if you've made a wrong turn, why keep going in the same direction?

Writing is a manic-depressive activity. When it goes well, it's exciting and fun. When it doesn't, it's a bummer. B-U-M-M-E-R.

I can see some things I could do and change to get a better direction going for the story, but that would entail just about starting over. Plus all those changes would make the story even longer. (I ran about the first fifteen pages through the local writer's workshop, and one of the more astute members commented that it felt like the beginning of a novel to her. For a story I wanted to keep under five thousand words. Ai-e-e-e....)

The wrestling with what to do continues. But I needed to vent my frustration a little.

*I never fully "abandon" a story. I've got what I call the Wonder Box, which is filled with notes, fragments and unsuccessful stories from years past. One good thing that came from pondering the problems with the current story is that it led to a realization on how I might fix an old, old story from back in my teenage years. Yeah, that old a story. Never throw anything away, kids.
Posted by Bruce at 2/28/2017 08:24:00 AM 1 comment: Links to this post
Email ThisBlogThis!Share to TwitterShare to FacebookShare to Pinterest
Newer Posts Older Posts Home
Subscribe to: Posts (Atom)