Here's a spooky little video for your Halloween pleasure:

Posted by Bruce at 10/30/2014 04:20:00 PM No comments:
Email ThisBlogThis!Share to TwitterShare to FacebookShare to Pinterest

(I've been trying to avoid politics in this blog. But there are a few things I've been itching to say. So here you go.)

I've been a little more involved in this year's elections than usual. As in, some of the races are important enough to donate money to.  I don't, usually.  Bad citizen, Bruce, bad! [baps himself on nose with a rolled-up election ballot]

I've been contributing to the Congressional races for both Ann Kirkpatrick, who represents much of Northern Arizona, and Ron Barber, who represents Southern parts of Arizona. Both Democrats. It's been a while since I've voted for a Republican, as the Republican party has drifted, paddled and swiftboated itself further and further into extremism and extremist-enabling policies. Both Kirkpatrick and Barber are facing immense spending campaigns on behalf of their opponents, much of it from "dark money" contributors like the Koch Brothers. So the emails I receive from their campaigns contain constant pleas for more private contributions to their own campaigns.

Which I wouldn't mind all that much, if it weren't for the tone of those emails. (Barber and Kirkpatrick seem to have the same people in charge of writing their campaign emails.) But when the emails come with subject lines like "All Hope Is Lost" and "We Might As Well Go Home", when the contents are a constant parade of catastrophism and desperation and "If you don't contribute MORE, if you don't contribute NOW, we're DOOMED! DOOMED!!!", somehow I come away with an attitude of "Is it worth my bother to keep contributing to these campaigns?"

Look, you two, you knew going in that the Republicans had deeper pockets than you, you knew you were always going to be outspent by significant margins, you knew negative, misleading and dishonest ads were standard Republican practice.  They're spending eight-friggin'-million dollars to defeat you? If you matched that, they'd just reach back into those deep, dark pockets and pull out ten million, twelve million, fifteen million. They are always going to spend more than you; that's part of the Republican game plan.

So you need to run a better campaign. You need to encourage voters to not only vote against your opponents, but to vote for you.  And not just the casual voters who see your TV ads or read your mail flyers, but the people who've actually been supporting you. All those emails you send, sometimes several times a day? They don't increase my support; they discourage it.

I want to hear that contributing to your campaigns will not only defeat undesirable Republicans, but that returning you to another term in Congress will be good for me, good for Arizona, good for the USA. I want to hear that your re-election will give me flowers and chocolates and a pony the next morning. (Well, a pony may be a bit much., even when speaking metaphorically.)

It's a common saying that Democrats are able to "snatch defeat from the jaws of victory".  Anne, Ron, don't be those Democrats.

I've also made contributions to another Congressional race, the face-off between incumbent Republican Matt Salmon and his Democratic challenger James Woods.

Woods will lose, barring a miracle.  Which would be ironic, considering Woods is publicly and unapologetically atheist. He's also pro-choice, pro-feminist, pro-public-healthcare, pro-NetNeutrality, and proud to label himself a "Progressive". All this is one of the most conservative Congressional Districts in Arizona. Unless Matt Salmon gets caught, as the saying goes, in bed with a dead girl or a live boy, Salmon's reelection is pretty much a shoe-in.

But Woods is also open, honest, and frequently funny. (Here's a link to Woods' reaction to stupid questionnaires.) He eschews the common soundbites and cliches of most candidates.  He's the most likable candidate I've seen running in years.

He's also blind. This only happened to him in recent years, following serious medical issues that also required a kidney transplant and extensive hospitalization. And mostly before the Affordable Care Act, so he's had his finances wiped out and had to try and live on food stamps in addition to his medical issues. That's a major reason for his progressive values; he's been in those trenches.

This is a guy who's running a remarkably good, if unlikely, campaign. His Facebook site is here.

All the above races are outside my own Congressional district, which has been represented by Republican Trent Franks for a long time. And the candidate the Democrats are fielding against Franks is... nobody.

That's right. Nobody. Not even a long-shot candidate like James Woods.

This pisses me off. The Republicans always put a candidate on the ballot, even for the most minor offices. Even if their candidate hails from Woo-Woo-Istan and get their political beliefs from the voices in their head.  It's discouraging enough when Democratic candidates campaign badly; it's worse when they can't be bothered to campaign at all.

Well, maybe not so much. Ducey didn't make millions by selling ice cream. He made millions by selling franchises. Rather high-priced franchises, making it difficult for many franchisees to make much profit from their outlets. And he sold a lot of franchises, ending up with a lot of "four-walling" areas with Coldstone outlets, oversaturating the market area and causing franchisees to compete against each other.  The end result was that about a third of Coldstone franchises failed to stay in business; a lot of franchise owners had to declare bankruptcy.

Let me emphasize that: People selling ice cream in Arizona weren't able to stay in business. There is something seriously fucked-up about that osrt of business plan. Unless you're Doug Ducey, who walked away with millions in franchise fees, and then millions more when he sold Coldstone to new owners. (The new owners seem to have better business ideas, and have been spreading Coldstone outlets over a wider area, including more states and even internationally.)

But I have an additional reason to not want to vote for Ducey. Every time I see a photo or commercial of Ducey, I find myself staring at his hair. Or, rather, what's purported to be his hair. Because if that's real hair on Ducey's head, someone needs to tell him that Shinola is not a hair cream. No, I'm almost positive that's a bad toupee. And when you put "Arizona politician" and "bad toupee" together, you can't help remembering -- AIEEEEEE!!! -- Evan Mecham. (Worst. Arizona. Governor. Ever.) 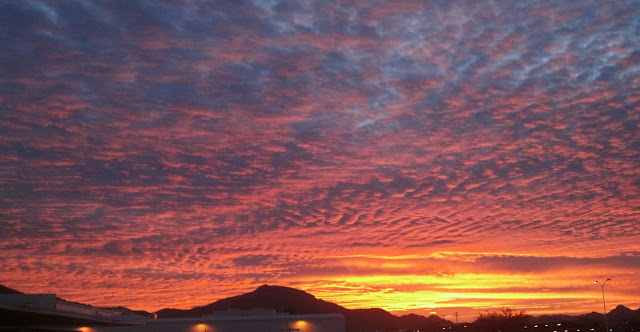 posted from Bloggeroid
Posted by Bruce at 10/18/2014 02:00:00 AM No comments:
Email ThisBlogThis!Share to TwitterShare to FacebookShare to Pinterest

Through The Lit-Fic Jungle With Pen and Notepad

My fiction-writing efforts over the last several months have been mostly concentrated on what turned out to be a 17,000 word novella, quite a bit longer than I usually write. Those are harder to market than shorter work.

But the biggest problem with marketing the story is that it's non-genre.

With very rare exceptions (see "Lost Creatures"), the fiction I've written has been solidly in either the SF/Fantasy camp or the mystery/detective genre (with occasional combinations of the two). I know where to send those stories; those markets are familiar to me.

But the new story lies pretty solidly in the middle of the mainstream/literary river. It's a family drama set in 1944 Home Front America, shortly before D-Day, told by a 10-year old boy. Stuff happens; things get complicated. It might be one of the best things I've ever written.

But it's definitely not suitable for SF/Fantasy markets. There's a marginal chance at the mystery markets, since an attempted child-abduction is the instigating incident of the story, but the tone and emphasis isn't the type of storytelling one usually sees at those publications. It's pretty clear that I've managed to write a "normal" story. (How the hell did that happen?)

So my best bet seems to be to try and place the story with one of the various literary journals. But I've been only marginally aware of the literary fiction marketplace for a long time, so I've been researching, trying to get a better handle on which have the best reputations and largest audiences.

(Money? Not likely to get much, if any, writing for literary journals. A lot still have "pays in copies" policies. Let's not discuss how many try to finance themselves with writing contests that have a hefty entry fee.)

So what I did was get contents information for five years each of the annual BEST AMERICAN SHORT STORIES series and the similar PEN/O. HENRY PRIZE AWARDS series, published by Houghton Mifflin Harcourt and Anchor Books, respectively. The BASS data came from the 2009-2013 volumes, and the OHPA data from 2010-2014.  Here are the sources for the stories included in the ten best-of books, and how many stories were chosen from which publications.

The New Yorker is clearly the 800-pound gorilla of literary fiction markets. Also reportedly the hardest to break into. By one source, they receive 40,000 submissions a year, and only very (very) rarely do stories get picked from that Mount-Everest-scale slushpile.

The word "Review" in a literary journal's title is apparently code for "Here There Be Serious Lit-Fic".

While a lot of the journal titles are familiar (for descending values of "familiar"; roughly, the fewer stories selected for the best-of books, the less likely I've heard of it), there are very few I've actually read. (An occasional New Yorker, less occasionally McSweeney's and Narrative, and I think I've read one or two issues of Glimmer Train and Granta over the years. Everything else I only know -- vaguely -- through reputation.)

Checking websites and submission guidelines, a lot of the journals listed here don't accept novella-length fiction.  But there are a few. Ploughshares has a separate program, Ploughshares Solos, where they publish novellas in short-book format; I might give my story a shot there.


NOTE: Googling around, I found a writer named Clifford Garstang has been doing similar breakdowns of selections for the Pushcart Prize collections. The Pushcart Prize is for independent publishers, so the New Yorker isn't included in that database.  But Garstang's lists are yet more data for writers of literary fiction. 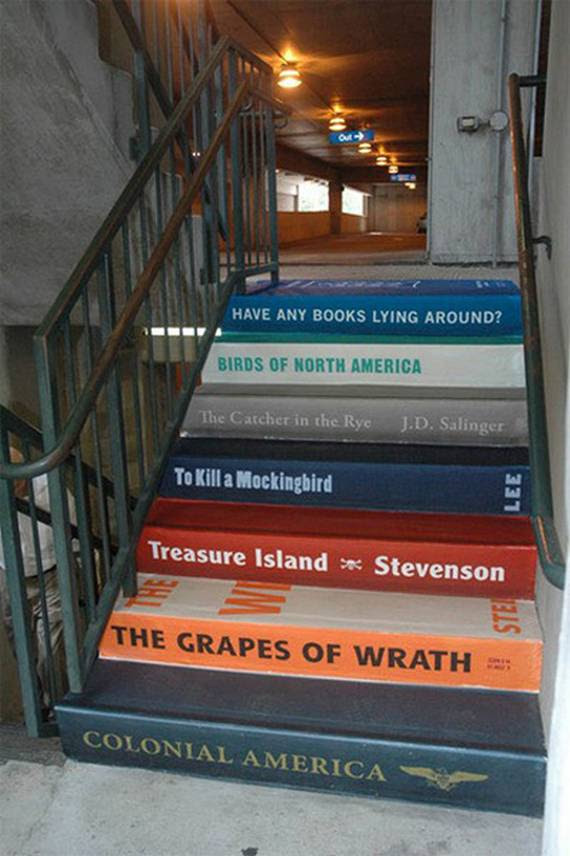 Found via my niece's Twitter account. Thanks, Leah!  More decorated staircases here; some are "meh", but a lot are almost as cool as the one pictured here.
Posted by Bruce at 10/01/2014 06:36:00 PM No comments:
Email ThisBlogThis!Share to TwitterShare to FacebookShare to Pinterest
Newer Posts Older Posts Home
Subscribe to: Posts (Atom)