Gonna try to keep a running log of books read and audiobooks listened to this year. 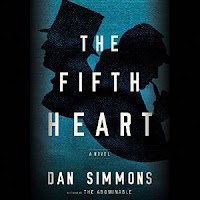 Don't You Know There's A War On?, Richard R. Lingerman, Putnam, 1970. Some of the fiction I've been writing lately is set in mid-20th Century, including one story set specifically in Home Front America during WWII. This is a useful overview of that period when America geared up for full-scale war, including mention not only of the extraordinary accomplishments, but of the effects on American society and behavior.

The Fifth Heart, Dan Simmons, Blackstone audiobook (narr. David Pittu), 2015. Every writer, it seems, wants to take a crack at writing in the Sherlock Holmes genre at least once. In The Fifth Heart, Simmons' twist is pairing Holmes with hyper-literary writer Henry ("Turn of the Screw") James. The unlikely pairing takes the two into the top levels of 1893 Washington DC society to investigate the 1885 death of Clover Adams, and to the 1893 Chicago World's Fair to stop a Presidential assassination plot. Parts of this novel are a lot of fun (the section where Henry James performs a devastating literary critique on the Holmes tale "The Adventure of the Copper Beeches" is a special hoot), but considered as a whole I kept feeling that Simmons didn't have a firm hand on the narrative. There are points where Holmes feels less like Holmes, and more like Batman, James Bond, or The Shadow. So, a great read in parts, but the sum of those parts ends up being less than the story as a whole.

Maplecroft, Cherie Priest, Roc, 2014.  I'm not generally a fan of Lovecraftian fiction. I've read a good chunk of Lovecraft's original work, once, and haven't felt an urge to re-read it. I've read some other assorted Lovecraftian work, usually short stories, and again it's been a read-once. The tropes get repetitive and tiresome after a while. Cherie Priest manages to freshen up those tropes by mashing up Lovecraftian elements with the real-life Lizzie Borden, famous accused murderess. Priest's version of Lizzie killed her father and stepmother because they were changing into... something non-human, and continues to encounter and battle other Lovecraftian creatures that the Falls River community has become a focal point for. Priest manages to overcome my ennui about Lovecraft stories, and produces a genuinely creepy and gripping adventure. (Would I re-read it someday? Umm, probably not, but I enjoyed the book more than I expected.) 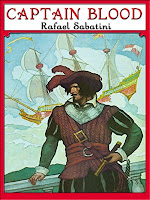 Captain Blood, Rafael Sabatini. Blackstone audiobook, 2004 (narr. Simon Vance). Sabatini is one of the classic writers of historical fiction, reinvigorating the genre in the 1920's with the publication of Scaramouche. Captain Blood is another of his most highly regarded novels, telling the tale of Doctor Peter Blood, wrongly convicted of treason during the Monmouth Rebellion and sold into slavery in the Caribbean colonies. Escaping slavery, Blood becomes a pirate. Many adventures ensue, with broadsides and boarding parties, cutlasses and cudgels, and more swashes buckled than you can count. Eventually Blood regains his honor and takes revenge on the brutal man who had been Blood's master during Blood's time as a slave. Classic adventure narrative; I was surprised to find the novel had originally been a series of short stories in magazines; the novel fix-up reads smoothly without any jarring breaks. Simon Vance's audiobook narration is a bit on the bland side, particularly noticeable when Blood's Irish-accented dialogue never seems to waver in emotional tone.

The Traitor Baru Cormorant, Seth Dickinson, Tor, 2015. Oh, this was a good one. A rebellion-against-the-conquerors fantasy is made memorable by the depth and complexity Dickinson imbues into the story.  Dickinson gives clear and understandable depictions not only of the military battles and maneuvers involved, but also of the background plotting, scheming, double-crossing, backstabbing (sometimes literal) and betrayals that are a constant threat and danger among all involved. Everyone has their own agenda, that agenda isn't always the public one, and in the end no one can be trusted. The titular hero (for flexible values of "hero") Baru Cormorant, a political appointee from the expansionist Empire of Masks to the distant conquered land of Aurdwynn, but herself a native of another conquered land, has her loyalty to the Empire come under question and flees, eventually rising to form an alliance between Aurdwynn's dukedoms in a rebellion to drive the Empire from their lands and shores. Baru's decisions in pursuit of that alliance are hard and sometimes brutal ones, where the pursuit of a goal can override loyalty or even love. A very, very impressive first novel.

Mr. Churchill's Secretary, Susan Elia MacNeal, Random House Audio, 2012 (narr. Wanda McCaddon). This is the first novel in the Maggie Hope series of mystery/thrillers set in WWII England. In 1940, with Churchill only recently made Prime Minister and England under threat of invasion by Germany, Maggie Hope, seriously overqualified young woman with high degrees of math and language skills, lands a position as a typist in the Prime Minister's office. This places her in position to play a part in discovering and foiling a plot by German agents and IRA extremists to make a multi-pronged attack on British institutions. I have a fondness for Home Front stories (see the first review at the top of this post), so I wanted to like this one a lot. I liked it, but not a lot. It shows some typical problems for a first novel. There's an outrageous coincidence driving a large part of the plot, the attitudes shown towards homosexuality are closer to current-day than they would be in the 1940's, and the cast of characters is a bit large to easily keep track of. But you also get some great historical details and tidbits (the bit about German agents hiding Morse code in newspaper fashion advertisements is true), and good descriptions of what it was like living under imminent threat and experiencing the bombing raids of the London Blitz. At the end of the novel, Maggie's skills have been recognized and she's being recruited into the MI-5 intelligence agency; I rather felt like this first novel's main purpose was setting things up to achieve that goal, and liked this one enough I'm probably going to read or listen to further books in the series.

Besides full books and audiobooks, I regularly read or listen to short fiction in various venues, both print and podcast. But that's usually about 40-50 stories a month, so I'm keeping this book log to actual full-length books for now, unless something at shorter length is very impressive or memorable.
Posted by Bruce at 2/17/2016 04:59:00 PM No comments: Links to this post
Email ThisBlogThis!Share to TwitterShare to FacebookShare to Pinterest
Newer Posts Older Posts Home
Subscribe to: Posts (Atom)