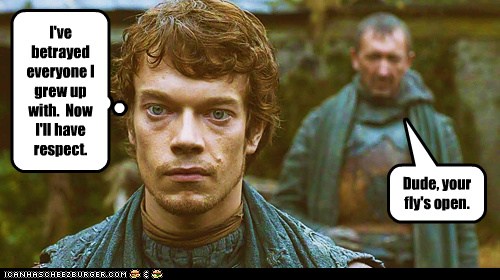 Posted by Bruce at 5/23/2012 02:37:00 AM No comments: Links to this post
Email ThisBlogThis!Share to TwitterShare to FacebookShare to Pinterest

The Arizona Secretary of State, Ken Bennett, is making threats to remove Barack Obama's name from the election ballot unless the State of Hawaii provides proof of Barack Obama's birth there.  He says he's doing this because "1,200 constituents" have emailed him expressing doubts about the validity of Obama's birth, citizenship and eligibility.

In short, he's acting as an enabler for the Birther Conspiracy folks.

At this point, after every so-called-fact and objection and fantasy the Birthers present has been disproven, again and again and again, the only sane reaction to Birthers is to call them what they are:  Lunatics, imbeciles, and saboteurs.

Saboteur, one who engages in sabotage.  The term purportedly inspired by Netherland workers in the early Industrial Age who would throw their wooden shoes (sabots) into the gears of machinery to break and jam the machines that were threatening to destroy their jobs and livelihoods.

Leaving aside the genuine lunatics and imbeciles among the Birthers, sabotage is precisely what the remaining Birthers are trying to accomplish.  They're trying to subvert the political process, overthrow the results of the last Presidential election,or failing that to distract their opponents's time and energy away from real issues and problems.

The Office of Strategic Services, the precursor to the CIA, produced a manual of sabotage methods.  Besides actual physical damage, those methods also recommended ways to slow down efficiency and production via more passive methods.  And one of those recommendations was to always keep raising irrelevant issues.

So, is Ken Bennett a lunatic, an imbecile, or a saboteur?

If he's a lunatic or an imbecile, he's unfit to hold his office, and should be removed.

But if he's a saboteur, why?  Why would he threaten to remove Obama's name from the ballot?

Oh, wait. He IS the co-chairman of Mitt Romney's election campaign in Arizona.

At this point, you really have to sit back and take a deep breath.  The magnitude of the conflict of interest here is so amazing that the audacity is breathtaking.  The state offical in charge of elections is a partisan and offical campaigner for one candidate, and is threatening to remove the other candidate's name from the ballot.

Let's cut to the chase here:  Ken Bennett's actions have proven that he's morally and ethically unfit to hold his office.  He should either resign, or be removed.

Oh, and one more thing from that OSS sabotage manual.  Among all those passive methods of sabotage recommended, they pretty much boiled down to one simple technique: "Act stupid."
Posted by Bruce at 5/22/2012 12:17:00 PM 1 comment: Links to this post
Email ThisBlogThis!Share to TwitterShare to FacebookShare to Pinterest

I've noticed the last few months that more and more businesses are asking people to "like" them on their Facebook pages.  In return, you get access to special coupons or discounts.

Among the many sins of Facebook, I think the worst is that it's devalued and cheapened the meaning of "friend" for an entire generation.

I also don't like feeling that I've been offered a bribe.  Especially a bribe to cast a vote.  It may not be an actual election for a Governor or Senator or President, but on an emotional level it still feels just like I'm being asked to commit voter fraud, even if the actual vote being asked for is one I might have given without the bribe.

So when I see such a request, my response isn't to go to Facebook and click that "Like" button.  My response is to get annoyed.  And when I'm annoyed at a company, my tendency is to NOT buy their product or services, even if I've been their customer before.

I've seen this sort of thing from a number of businesses, but the specific instance that generated this post was having such an offer from the Science Fiction Book Club, where I'd get an extra discount for "liking" them on Facebook.

Hey, SFBC, I've been a member since 1975, and I've probably averaged at least a couple of hundred dollars per year in orders from you over all those years.  So if you want to offer me a discount, why not offer me a discount for being a good customer for decades?

(And I get those kind of offers, in regular emails from SFBC, on a frequent basis.  I don't mind those; they feel like they are being offered because I've been a good customer for so long.  But to be offered a discount just to pump up their popularity on --ewww--  Facebook?  That pisses me off.  And when I'm pissed off, the last thing I'm going to reach for is my checkbook.)
Posted by Bruce at 5/17/2012 03:34:00 PM No comments: Links to this post
Email ThisBlogThis!Share to TwitterShare to FacebookShare to Pinterest


I'm not a teapot collector, but I've gotten into the habit of following some of the teapot-competitions in the ceramic art world.  Big Fish, Small Pot V, the fifth annual competition by the American Museum of Ceramic Art in Pomona, CA, is running thru June.

The link goes to a slide show of the entries.  The Grand Prize winner is this one:

﻿
The nice thing about this particular teapot winning is that it has good function as well as good form.  The artist used a variety of techniques in its design and decoration, AND it will not only hold a decent amount of tea, but it looks like it would be easy to both fill and to rinse out after use.  Some of the other entries, not so much:

The "Celtic Tea" entry won First Place.  On technical grounds it's pretty impressive (I wonder how many versions he had to make before one came out of the kiln in one piece?), but as an art piece it doesn't thrill me and as a teapot it doesn't look very functional.
Posted by Bruce at 5/16/2012 02:44:00 AM No comments: Links to this post
Email ThisBlogThis!Share to TwitterShare to FacebookShare to Pinterest

Bruce and Hilde See A Movie. World Comes To End.

'Cause that never happens.  I think the last time we went to see a movie at the theater was Master and Commander (2003).  Because it's friggin' expensive, and because we seem to have grown into being one of those old couples who never -- well, almost never -- do anything spontaneous or fun outside the house.

So what got us out of the non-theater habit yesterday?  Being back to work full-time, with better pay than before, definitely made it more comfortable from a financial viewpoint.  ("Mad Money": We have a little bit, for a change.)  So what did we actually go to see, even at theater prices?

The same movie everyone else in the entire world saw last weekend, or will go to see in the next few weeks:  THE AVENGERS

It's a comic-book movie, and full of Magic Science and other comic book tropes that don't bear too much thinking about.  But it's a great comic-book movie, with slam-bang action, numerous quotable lines of dialogue, and great special effects.

The moment when I willingly suspended my disbelief, though, was when the "aircraft carrier" turned out to be the S.H.I.E.L.D Heli-Carrier from the original comics: 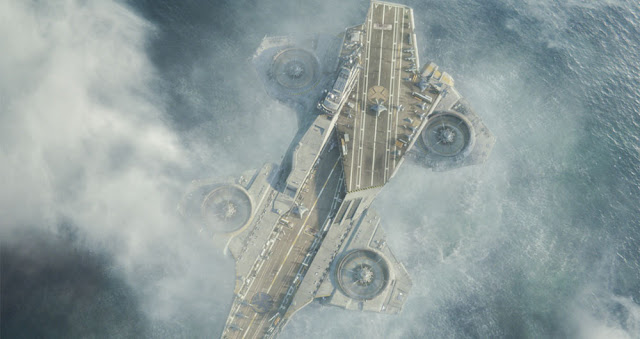 I read those original comics back in the 1960's where Nick Fury was recruited into SHIELD and found himself in a flying aircraft carrier.  Even back then, even as a kid, I recognized that a flying aircraft carrier was impossible, was ridiculous, was absurd. But when that sucker lifted out of the water on the movie screen, I believed an aircraft carier could fly.  Writer/director Joss Whedon caught me up and carried me along on his thrill ride.   Good work, Joss.

Posted by Bruce at 5/10/2012 12:44:00 AM No comments: Links to this post
Email ThisBlogThis!Share to TwitterShare to FacebookShare to Pinterest
Newer Posts Older Posts Home
Subscribe to: Posts (Atom)