The New Normal: Living Under the Sword of Damocles 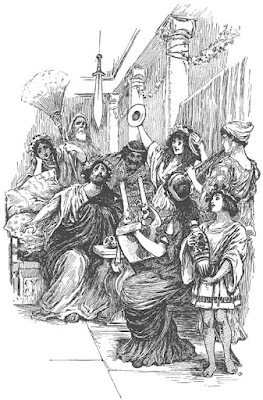 Over on Twitter during the last several months, I've made several vague allusions to "medical issues" Hilde and I have been dealing with. Those issues have reached a point of (current) stability that I finally feel able to write about.

Hilde's had severe Rheumatoid Arthritis for fifty years, since she was 22. The RA has worn at and worn down her body and ability to use it ever since, and has made her become progressively more and more disabled and dependent.

Back in 2001, the RA looked like it might literally kill her. Her C-1 vertebrae, at the top of the spine, had degraded to the point it was beginning to break apart, allowing her skull and brain to begin moving downwards. In the neurosurgeon's memorable phrase, her brain would be "pithed like a laboratory frog". Without reconstructive surgery, he estimated her life expectancy as two weeks to six months (but most of that six months would be as a brain-damaged quadriplegic). The surgery itself was not without risk, with a 1-in-7 chance of dying on the operating table.

That surgery was done, Hilde survived, and for seventeen years her neck has been held together with wires and rods and screws. Her neurosurgeon has said most people who have that type of operation gain another 2-5 years of life, so she's beaten those odds several times over. (When we've seen the neurosurgeon every few years for follow-ups, we get the impression he'd like to put Hilde in a big glass box and take her to medical conferences to show off to other doctors.)

BUT... when hardware's been in a body that long, things happen. It degrades. It shifts. It breaks.

About 7-8 years ago, Hilde began to get a couple of small lumps on the back of her neck. X-rays revealed some of the surgical screws were slowly working their way loose and trying to back out of their holes. We were advised that it was something to keep an eye on, but not anything critical or dangerous at that point. We had another follow-up in 2015, when the lumps had gotten slightly larger. At that appointment, we were told that a second reconstructive surgery would be much more dangerous, with only 50/50 odds of surviving the operation. We were advised that unless the shifting hardware got to the point where it punctured the skin and provided a potential entry point for spinal cord or brain infections, surgery probably shouldn't be considered an option.

That point was reached in late January of this year; one of the lumps on Hilde's neck had increased in size dramatically over the previous month or so, stretching the skin to the point that a small tear, about pinhead size, opened up.

So, since then, we've been doing our best to keep that opening clean and free of infection, treating it daily with antibiotic ointment, while we've been consulting the neurosurgery department at the Phoenix branch of the Mayo Clinic. (Hilde wants any future surgeries done at Mayo because the quality of care is much higher than other hospitals -- like, a lot -- she's been in over the years.)

The findings from x-rays, cat scans, MRIs, bone density scans, etcetera, have been... not good.

Essentially, by this point, all the hardware in Hilde's neck has failed, coming loose or broken, and what's probably continuing to hold Hilde's neck together is the scar tissue from the 2001 surgery. To go in to remove the failed hardware would entail cutting through that scar tissue, probably resulting in further destabilization of the neck and spine, leading to further complications ranging from chronic neck pain to quadriplegia to death.

Further, Hilde's bone density (after fifty years of RA and steroid meds) is officially osteoporotic, and the Mayo surgeon feels attempting to install fresh hardware would either fail quickly or possibly be unable to do at all.

Plus... the MRI showed that Hilde's upper spine, rather than being a smooth curve, has a slight dog-leg bend (something like the dog-leg chisel shown at this link) that's already putting compression on her spinal cord in two places. Dealing with that would be a further complication and increased risk for surgery.

So... the recommendation has been to not attempt surgery at this point, but to continue treating the skin break on Hilde's neck and avoid infection. Which is what we're doing.

But at some point, Something Will Happen. A germ might get lucky and start an infection despite our efforts. More of Hilde's internal hardware will move and shift and create a critical situation. That compression on Hilde's spinal cord might increase and create its own crisis. At that point, assuming Hilde survives whatever critical failure occurs, postponing surgery may not be an option. And, if she survives that surgery, it's very uncertain what quality or how long a life she might have afterwards.

So that's our New Normal.

(Added: This has been the Biggest Bad in our lives since January. Hilde's also had a slew of other, unrelated issues since November, including two hospital stays, hearing problems, and losing the remaining functionality in her left arm, which last has left her unable to hold or read printed books anymore. She also can't use touchscreens or a mouse to use an ereader, so she's currently feeding her book jones with audiobooks that I or Tabbi start or stop for her. There's a new control-with-head-movements program that looks like it might make it feasible for her to use a tablet, but it's been difficult and frustrating for her to try and learn.)