Ten Reasons To Load Up Your Wallet And Head To Scottsdale

The Barrett-Jackson Classic Car Auction is held annually across town in the second-filthiest (as in, "filthy rich") city in the Phoenix metro area, Scottsdale. They auction off rare and valuable collector cars, to the tune of six-digit and occasional seven-digit pricetags.

Very pretty to look at, but I've never wanted to actually own any of the cars sold there, at least not at those kinds of prices. (A Lamborghini? How much lumber and shit from Home Depot can you load into one?)

But I saw the back-cover of the new 2008 B-J auction catalog this morning....

This year, on January 19th, Barrett-Jackson will be auctioning off... 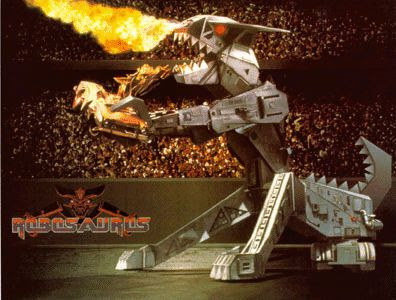 
Because what red-blooded American boy (at heart) would not want to be the next owner of (OMG!) Robo-friggin-saurus!?

Reasons? You want reasons? Okay, here are your damned reasons:

3) It's a forty-foot tall robot dinosaur!

5) It's a forty-foot tall, flame-throwing robot dinosaur that can pick up an entire car and bite it in half, dude!

6) Chicks dig flame-throwing robot dinosaurs. Yes, really! (And if they don't, they damn well ought to start.)

7) People will be able to find your house easily. ("Just look for the house with the forty-foot tall robot dinosaur parked in the side yard.")

8) The Yard Nazi -- pardon me, I meant to say "City Code Compliance Inspector" -- who leaves you snide notes about your lack of lawnmowing ambition will never bother you again. (Did I mention the flame-throwers?)

9) I can't believe no one's gone to Sci-Fi Channel with the idea for Flame-Throwing Robot Dinosaur, a Sci Fi Original Saturday night movie.

10) And because when you're the owner of a forty-foot tall, flame-throwing, metal-rending robot dinosaur, you will be -- at last, at long, long last -- Cool.
Posted by Bruce at 1/06/2008 12:00:00 AM 1 comment:
Email ThisBlogThis!Share to TwitterShare to FacebookShare to Pinterest
Newer Posts Older Posts Home
Subscribe to: Posts (Atom)