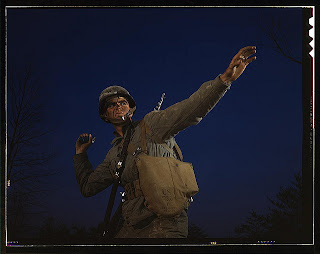 I was doing a walking patrol at work in the early AM this morning, with jacket and ear mitts and gloves and knit cap on, thinking that if the weather got much colder in coming days I'd have to dig out my old woolen long underwear left from when I was in the Army.

And that was when I realized that exactly forty years ago was my first day of that three-year enlistment in the US Army.  January 23rd, 1972.

It was an interesting three years.  I had some of the best experiences of my life, and some of the worst.  All my service was at Stateside posts.  I never saw combat.  But there was one period when things got stressful enough I would have jumped at a chance to go to Vietnam rather than stay where I was.  (I got lucky, and ended up in a different company at the same post, with different people and doing a different job, and did pretty well the rest of my enlistment.)

The deep tint on my rose-colored glasses faded a lot during those three years.  I met a lot of good men, and some outstanding ones.  But it was also the first time in my life that I met, and lived and worked with, bad men, men who would probably have ended up in prison in civilian life.  Some of whom were in the Army because enlisting was offered as an alternative to prison, and a few who went to military prison in the end anyway.

But the worst was learning that... well, when I went into the Army it was with the belief that officers were the cream of the crop.  They were smarter and wiser and better trained for and more suited to leadership than us ordinary grunts.  And you know what?  Some of them were.  And then I learned, from harsh experience (this was part of that very bad period I mentioned above), that there were some officers who put the welfare of their careers ahead of the welfare of their men.  Hell, ahead of the lives of their men!  It was... disheartening.

For years after getting back into civilian life, I had the thought in the back of my head that if things got rough in the real world, I could re-enlist in the military.  Sometimes that seemed like a tempting thought.  And then one day I found myself taken quite aback when I realized, "Holy crap, I'm too old to re-enlist anymore!"

(photo above from Library of Congress, via Flickr Commons)


Posted by Bruce at 1/23/2012 12:33:00 PM
Email ThisBlogThis!Share to TwitterShare to FacebookShare to Pinterest