As reported previously, I seem to have started writing fiction again -- completed fiction! -- in recent months, after a long dry spell since 2006.  Besides wanting to send those new stories out to markets, I thought some of the old unsold stories might be worth trying again as well.

So I spent a couple of hours the other night consolidating all my old story manuscripts into one location.  They were scattered over several old computers and a small stack of diskettes.   They now reside on a key drive; I'll get the files copied over into my current computer, then copy again onto a second key drive that will go into the safe-deposit box at the bank.  (Should I go to Google Docs and store them on the cloud as well?  I'll think about that.)

Yeah, yeah, this is all stuff I should have done years ago.

I had a short period of distress when I couldn't find the diskette that contained the majority of the short stories.  All I found was a diskette labelled with the title of one story, "The Spearsister".  I thought I might end up having to retype almost everything into the computer.  (Whenever I finish a story, I print out a hardcopy and put it in a file cabinet.  I'm not totally irresponsible.)

But when I put that single diskette in the old drive, all the missing stories were included on it.  *whew*  (The one story that wasn't on that diskette?  "The Spearsister")

﻿﻿﻿﻿﻿﻿﻿
I also found out that my 20-year-old old brick-shaped/brick-weight Mitac laptop (with a mind-boggling forty megabytes of memory!  Whoo-hoo!), the machine I wrote a lot of my fiction and scripts on when I was more prolific, would no longer power up.  (It still turned on as of a few years ago.)  Anyone need a doorstop?

﻿Speaking of scripts: After selling the "Clues" script to ST:TNG in 1990, I tried to follow up on that success by writing and trying to sell movie scripts.  (Why not try for a television career?  Because it's almost mandatory to live in the LA area if you're a TV writer; giving up the security--  and health insurance-- of my Postal Service job and jumping naked into the shark-infested waters of freelance scriptwriting was too big a risk, even if Hilde had been willing-- she wasn't-- to live in LA.  It's possible, if rather more difficult, to try and sell movie scripts from a non-LA location, while still keeping your day job.)


I wrote four movie scripts between 1990 and 1995.  With the ST:TNG sale, I was able to get an agent; he had a little hole-in-the-wall office and no one recognized his name either, but he was being sponsored by a respectable figure in the business and that connection actually got some of my scripts read.

Two of the scripts, KANSAS BLOOD, a historical set in "Bleeding Kansas" of 1856, and JUNKER TOMMY, a weird "social fantasy" (my term) about a young boy whose parents take him down to the Used Kid Lot and trade him in, got me called in to Hollywood by several production companies who expressed interest.  One company kept expressing very strong interest in the JUNKER TOMMY script, but after several months I had my agent tell them they needed to put actual money on the table.  (I'll spoil the surprise: They didn't put money on the table.)

My other two movie scripts, THE HERO BIZ and DEAD SIRIUS, were deliberate attempts to write "commercial" scripts.  For "commercial", read "dumbed down".  They went nowhere.  The Kansas and Junker scripts, where I'd tried to stretch myself, to write something better and stronger and different than what I was seeing on movie screens, where I was "writing up" instead of "writing down" got some attention.  Let that be a lesson.

(The KANSAS BLOOD script actually began as another "commercial" attempt.  I was meaning to write a big action drama whose main character could only be played by Arnold Schwarzenegger.  And then I reached page 10 of the script, and Arnold's character... got killed.  Wait, what?  How the hell did that happen?  And from that point on, the rest of the script was about Arnold's nephew trying to live up to the example set by his uncle.  Still an action drama, still a big historical.  But it was a better story than my original intent.  Let that be another lesson.)

Why did I stop trying to sell scripts in 1995?  Not because of lack of success.  I had a television sale under my belt.  I was getting some interest, I was getting called out to occasional meetings.  That's better than most fledgling screenwriters do.

I stopped because at my day job with the Postal Service, 1995 was the Year of the Toxic Boss From Hell.  He not only acted like a street thug, he was a street thug.  He actually bragged about having belonged to one of the South Phoenix gangs as a teen.  He was good, very very good, at both physical and verbal intimidation, and he was relentless about it.

I wasn't the only employee he harassed for months on end.  I wasn't the only employee whose life was turned into hell.  But I was the one who finally broke, broke hard, and ended up in the hospital with what looked and felt like a heart attack and off work for two solid months.  And when I did return to work, I was taking anti-depressant medication for the first time in my life.

And one of the side-effects of the anti-depressants was that my writing... stopped.  Stopped cold.  Stopped dead.  I'd go in my office and stare at the keyboard... and there was nothing there.  Any spark, any creativity I'd had, was gone.

Shortly after going back to work, I transferred to another station, expressly to get away from working with Toxic Boss From Hell any more.  (Yes, he was still there, still harassing other employees.  Not only was he still there, but a few days after I got back from my sick leave, the Phoenix Postmaster came to the station and called together everyone for a little ceremony, where they gave Toxic Boss a promotion for his outstanding management skills.)

(Yes, I filed a grievance with the union, backed up with a 40-page, single-spaced, 17,000-word statement detailing all the harassment; after the first few weeks of trying to work with Toxic Boss, I'd started keeping a notebook with dates, times, witnesses and other details.  Postal management dragged their heels on resolving that grievance for five years... and when they did, Toxic Boss wasn't fired, wasn't suspended, wasn't demoted, wasn't put to work scrubbing toilets.  All that happened was that USPS management wrote a letter admitting the harassment had taken place.  You think having that letter in his personnel file might make Toxic Boss behave better?  I don't.  I can just see him framing that letter, hanging it on the wall of his office, and bragging about it: "I put that dumb little fuck in the fucking hospital, and they still didn't do shit to me.   Ha, ha, ha, ha.  I am fucking invincible.  HA, HA, HA, HA!" )

Not that I'm bitter about that episode in my life.  I'd just like to be see Toxic Boss step into the street some day, watch him get hit by a speeding bus, and then knock bystanders' cellphones out of their hands as they try to call 911.  Not that I'm bitter, y'know.  Not at all.

After transferring to a different station, I was able to slowly wean myself off the anti-depressants.  I started getting a little bit -- a little bit -- of the writing urge back.  After about a year, I was off the medication completely and starting to feel maybe I should try to get back in the scriptwriting game.

And right about that time some certain, ahh, "financial irregularities" came to light about my agent's running of his agency.  His sponsor withdrew her support, and... well, it was like watching the Hindenburg crash and burn.  So I was left with no agent, no agency, my ST:TNG sale was getting to be a stale credit, my career momentum was gone, and I was basically back at Square Zero with every other wanna-be screenwriter in the world.

I was just never able to work up the energy to try and batter my way back into the game again.  I had been spectacularly lucky to make that ST:TNG sale as quickly and easily as I did, and trying to make a second sale had been a lot of work over and above writing the actual scripts.  Trying to get back in again from a cold start... too damn much to think about.   (It was easier the first time, because I didn't know, then, just how hard it is to break into screenwriting.)

I later re-wrote JUNKER TOMMY into a 30,000 word novella.  There weren't many markets for that length, so it never sold.  Some possible markets have gone under since 2006, the last period when I was still submitting manuscripts, but a few new ones have come into being, so I may send it around again.  If it still doesn't sell, I may eventually publish the novella as a short e-book.  I might eventually try re-writing KANSAS BLOOD as prose too; it's a "bigger" story, so it might well re-write into a full novel.

(My luck with writing novels, though, has been... zero.  I seem to be a short fiction writer by inclination, when I'm writing fiction at all.) 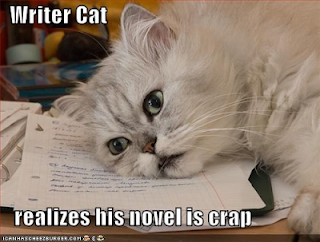 One other script in my inventory is "The Heart of Peace", the "spec" script I originally submitted to ST:TNG to get my foot in the door.  It was good enough to get me invited to pitch further story ideas, which eventually lead to the "Clues" sale.   It was fun to write; if you ever wanted to see young Wesley Crusher in the iron grip of raging teenage hormones, this is a story for you.  I should probably post it online as fan-fiction one of these days.