Why I Live In Arizona 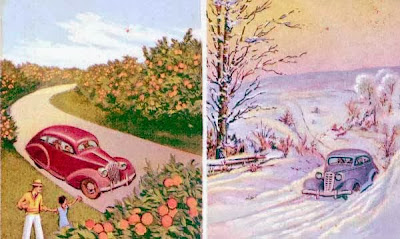 Because the picture on the left
is what the weather is like in Arizona right now,
while the picture on the right shows the kind of weather
Midwestern and Northeastern states are having.
(The image, from Flickr Commons, actually comes from
an old visit-sunny-Florida campaign.  But it'll pass for Arizona.)
I have never, ever, enjoyed being out in icy or snowy weather.  ("But the snow's so pretty!"﻿  So is flowing lava, but I don't want to play in it.)
I'm a traditionalist: I want my water to be liquid.  The only time I've lived someplace that had snow in the winter was during my Army service, when I spent two and a half years assigned to Fort Lee, in southern Virginia.  That area would get a thin layer of snow and occasional icy roads for about one month out of the year.  I would barely leave the barracks for that month.  (The unit I company-clerked for had its admin offices on the first floor of the barracks building, and an attached mess hall, so just about the only time I ever had to actually go outside was to deliver the unit's daily Morning Report to Battalion HQ across the street.)
There are two types of people:  Those who want to live on Tatooine, and those who want to live on Hoth.  I'm a Tatooine man.
(There used to be three types of people, but... well, we don't like to talk about Alderan.)

Posted by Bruce at 1/05/2014 08:10:00 AM
Email ThisBlogThis!Share to TwitterShare to FacebookShare to Pinterest