Weird Food -- You Got Capsicum In My Coffee Creamer! 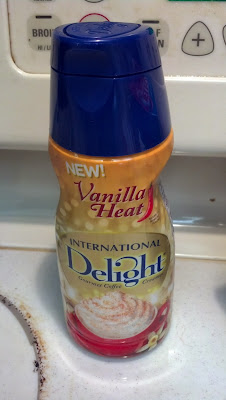 I will occasionally see something weird at the grocery store that I can't resist picking up andtaking home to try out.  International Delight puts out a line of flavored coffee creamers, in the usual flavors (Hazelnut, etc.) and some less than usual ones.  But those have all been on the "sweet" spectrum of flavors.

This new flavor, Vanilla Heat, is the first I've seen that uses a flavor generally reserved for the savory spectrum: This is vanilla-flavored with the addition of a chili-pepper flavor.

It's... pretty weird.  I like sweet, and I like savory.  But I generally don't like them together.  A couple of exceptions: Picadillo, a Spanish ground beef dish flavored with capers and/or green olives, vinegar and (yep, really) raisins.  And I've liked some of the salty-sweet snack crackers and chips from various producers.

As a coffee creamer, though, vanilla-and-chili doesn't really work that well.  The whole point of a coffee creamer, in my experience, is to mellow out the bitterness and occasional "burnt" flavor of coffee, especially the dark-roast varieties.  So the basic creamer calms down some of the flavors going into your mouth, and the added "sweet" flavors also help cover up those less pleasant aspects of drinking coffee.  (No, I don't do black coffee.  Ever.)

The chili flavor in Vanilla Heat works against that calming aspect of the creamer.  It excites and stimulates your taste buds, and not in a way I expect or enjoy.  It also leaves a mild "burn" in your mouth and/or throat.  I don't mind that type of burning sensation when I'm eating Mexican food or other spicy dishes, but it's not what I look for in my coffee.  (I tend to use enough sugar and creamer in my coffee in general that it comes closer to dessert than beverage, in some people's view.)  So overall, I have to say that Vanilla Heat fell solidly into the "Try It Once" category for me.

It reminds me of an old product called Cajun Cola, the story of which was profiled in a very interesting article in a 1990 issue of Inc magazine.  It was a "spicy cola" with a chili kick, and it sold very well... at first.  What the producer of the cola failed to realize was that a spicy cola was essentially a novelty item, and that most people would try it once or a few times and then go back to their standard cola drinks.  After a while, less than a year, sales tanked, and Cajun Cola died and went to the Museum of Failed Products.

International Delight's website lists Vanilla Heat as one of their "Seasonal" offerings.  From other reviews online, it seems to have gone on the market back in September.  I can't help wondering if it's being offered this last holiday season was an example of test marketing.  (Phoenix's diverse population makes it a popular city for companies to test-market new products.)  Personally, I'll be just as happy if they try out a different flavor next holiday season.
Posted by Bruce at 1/08/2014 02:47:00 AM
Email ThisBlogThis!Share to TwitterShare to FacebookShare to Pinterest
Labels: food, reviews, weird

This is Sourdough Jackson. Just ran across your blog. I'm trying to get in touch with a few old fannish friends from Phoenix--you & Hilde, James Sieber, Bear Peters, Ken St. Andre, Liz Danforth, Jim Walker, and (long shot) Krazy Suzan (used to be Roberts). Do you have contact info on any of them?

My email address is jjackson@forethought.net

I am well, still married to Gail, and at the same address I've always been at.

Still active in local fandom, and have gotten into fiction writing. I have one novel out with a local small press ("Torpedo Junction," an alternate-history based on Erwin Rommel being an American aviation admiral, not a German panzer general), as well as a book of essays on classic SF. I have two other novels in the works.

Hope you and Hilde are doing all right.

Hope to hear from you soon.