Some Men Just Want To Watch The World Burn 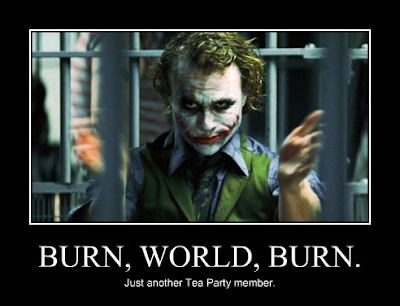 I'm just a little pissed at the current status of hostage negotiations in Washington, DC.  No, "pissed" doesn't cover it.  I'm enraged.

Are we really -- REALLY? -- going to let a batch of crazed extremists set off a fiscal bomb that may cripple, not just the American economy, but the world economy?   Because they think poor people don't deserve medical care?

Those words are also the names of actual crimes.  I believe the Tea Party faction of Congress are criminals, with criminal intent, and actually in the process of committing criminal acts.

Which means it's not John Boehner who can put an end to this.  It's not President Obama.  It's this guy: 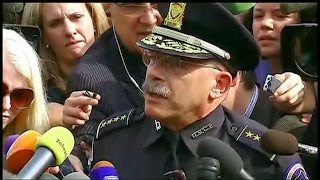 There are crimes being committed in your jurisdiction, Chief Dine.  It's in progress at this very moment.   It's on your watch.  It falls under your authority.

"Wait, what?  You can't arrest Congressmen!"

Really?  Because here's a photo of Congressman Raul Grivalda being arrested on October 8th:

Grivalda was arrested for taking part in an immigration protest and blocking traffic.   But there are dozens of Tea Party Republicans blocking the entire governmental process, and nothing is happening to them.

That is unconscionable.  I want to see these criminal bastards in handcuffs, in custody, and in prison.

Well, I said I was enraged, didn't I?

For a unicorn chaser from a calmer voice, An American Editor has a very interesting post about "The Illogical Republican".  AAE usually posts about the business of being a professional editor, but in this particular post he uses that professional perpective to speculate that Tea Party extremists may lack a capacity for effective "self-editing" of their thoughts and beliefs.  Essentially, Tea Partiers have brains filled with bad writing.
Posted by Bruce at 10/16/2013 03:34:00 AM
Email ThisBlogThis!Share to TwitterShare to FacebookShare to Pinterest