Had They But Known

I caught an old 1962 episode of the tv series NAKED CITY, "Hold For Gloria Christmas".  Naked City was framed around several police detectives, but the emphasis was on the personal stories of the ordinary people involved in the investigations.  It was sort of a halfway-house between the pure anthology series like PLAYHOUSE 90 and the modern tv series focused on a central and continuing cast.

The episode itself was well worth watching, with Burgess Meredith as a self-destructive, dying poet desperate to retrieve his poems from the bar-owner to whom he's traded the manuscripts for drink.  (Also, a frighteningly young Alan Alda in what must have been one of his first roles, as a contemptful rival poet.)

Something else that caught my eye, though, were the scenes set at a street newsstand.  Take a look behind Burgess Meredith in this screenshot; see what was on display at that newsstand? 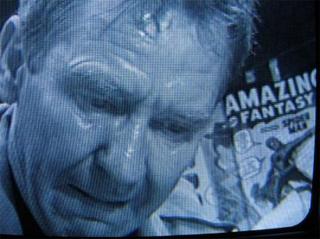 Oh, man.  Anyone still alive who ever worked on that episode who sees that screenshot must slap themselves in the forehead and think, "Oh, why couldn't I have slipped a little 'souvenir' from filming that episode down my pants?"

That issue of AMAZING FANTASY was the very first appearance of Spider-Man.  It would probably be worth more now than it cost to film that entire episode in 1962.
Posted by Bruce at 12/31/2012 01:45:00 AM
Email ThisBlogThis!Share to TwitterShare to FacebookShare to Pinterest