Over at Mess Nessy Chic, there's a cool photo gallery of old bookmobiles. 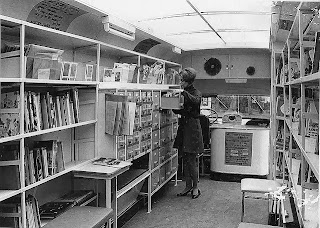 This one looks a lot like the inside of the bookmobile that came around the neighborhood each summer when I was growing up in the late 1950's and early 60's..

My primary source for books back then was my grade school library.  But the school library was closed during summer, and the city library was too far away to ride there on my bike.  So the bookmobiles that were sent around to outlying parts of the city each summer were lifesavers.

Since then, Phoenix and its outlying communities have established a number of smaller library branches around the metro area, so the bookmobiles aren't around any more.  (There are programs for shut-ins who can't get even to the branch libraries, allowing them to request books and have them delivered by mail.)

In their time, though, the bookmobiles were sort of the equivalent of the Internet.  If you couldn't get to a library or a bookstore, the books would come to your neighborhood.

Googling a bit, I find there now exists the Overdrive Digital Bookmobile, a travelling exhibit in a large tractor-trailer that travels from city to city, showing library patrons how to use the Overdrive program to download e-books and audiobooks from their local library system.  I use Overdrive frequently for the books I read on my smartphone.

(I also found out last week that an update to Overdrive now allows me to directly download audiobooks to the smartphone, which hadn't been possible before.   Whoo-hoo!  Used it last weekend to listen to Iain Bank's Player of Games while making my rounds at work.)