The recent decision to cease using Gahan Wilson's statuette of H.P. Lovecraft as the official World Fantasy Award trophy has engendered a lot of comment and conversation online, both pro and con.

Lovecraft was, yes, a racist. That racism was expressed both blatantly in his correspondence and more covertly in his fiction. (Lovecraft's stories seep ichorously with "fear of the other".). Some argue against the change on the grounds that he deserves the honor for his still-influential fiction, and his personal beliefs and attitudes should be irrelevant. Plus, the argument sometimes continues, his racism began to lose some of its virulence later in Lovecraft's life. He died at only age 46; might he not have eventually become a (relatively) non-racist person if he had lived a full lifespan and continued to modify his beliefs and attitudes?

Pro-change arguments also include the charge that Lovecraft should never have been the face of the World Fantasy Award in the first place. Lovecraft's fiction is, with only a few exceptions, firmly in the horror genre. It's the World Fantasy Award, the argument goes, and Horror is only a subset of fantasy's breadth and possibilities. (Some also argue that Horror is effectively a separate genre from Fantasy.)

But none of the arguments I've mentioned above are why I'm writing this post. I'm generally in favor of replacing the WFA trophy with something different; I like the suggestion of making it a figure of a chimera. I tend to fall into the camp that thinks Lovecraft was probably a poor and too-narrow representative of the wide fantasy field in the first place. I also think whatever suitability Lovecraft might have had as the face of the World Fantasy Award has passed; the social and political baggage he carries has grown heavier as years have passed, as society and the world has changed.

But I'm writing this to complain about one other argument that people have been making.

They say the Lovecraft statuette should be discarded because "It's ugly."

Well! Besides the fact that it's kinda (a lot) rude to call someone or their artistic representation "ugly", I'd argue that it's just plain not true in this case.

What Gahan Wilson does is Grotesque.

"Ugly" is a value judgment. "Grotesque" is a style statement.

When Gahan Wilson draws or sculpts a face, it's going to be bulgy and lumpy, exaggerated and twisted. Lips sag, jaws jut, and don't even think about the teeth. Here's a sample of Wilson's line art: 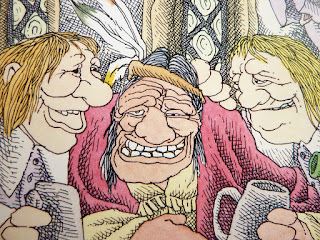 But for those of us who do like or love Wilson's work, the Lovecraft statuette isn't "ugly". It's exactly what one would expect from Gahan Wilson. Exaggerated. Off-kilter. Cartoonish. (Oh, hey, what's Gahan Wilson best known for? Being a cartoonist.)

Here's one of numerous realistic renditions of Lovecraft by other artists. This one's by Lee Joyner: 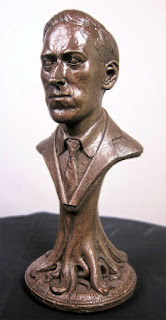 I have to say that, except for the tentacular base, that's... kinda boring. He looks like he could be a college professor, or a church deacon. The artist has made Lovecraft look... normal.

Y'know what? I actually like the WFA Lovecraft statuette, even if I don't think it's the best choice for an award trophy. I think its off-kilter, unrealistic, unorthodox appearance captures the essence of Lovecraft's own off-kilter, unorthodox mind and personality.

(I should probably mention that I have, at times, described the WFA statuette as "a gruesome little mutant spud, harvested from a potato field planted above an old Indian graveyard located far too closely downwind of former nuclear test sites". But I mean that in an affectionate way, not to denigrate the work.)

Fine. You're entitled to say any of that.

Because that word is rude. And ugly.