Grace of Kings, a first novel by Ken Liu, arrived in the mail today. Liu's been producing an extremely impressive string of shorter fiction in recent years (he's one of my "must-read" authors), as well as translating works of Chinese sf authors. (He did the English translation for the recent US publication of The Three-Body Problem by Cixin Liu.) Grace of Kings, an epic fantasy influenced by classic Chinese literature, has been garnering outstanding reviews and recommendations; it'll almost certainly be a major award-contender next year.

I've also seen a lot of appreciations for the striking cover of the book, but I'm surprised no one seems to have mentioned the gorgeous endpapers, with a map of Liu's fantasy archipelago. How about we fix that right now? 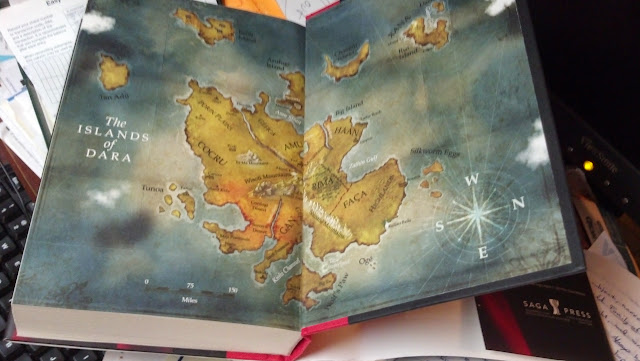 (The Grace of Kings cover is by Sam Weber. There doesn't seem to be an internal credit for the endpapers. Were they by Weber as well?)
Posted by Bruce at 4/24/2015 05:36:00 PM
Email ThisBlogThis!Share to TwitterShare to FacebookShare to Pinterest

That's weird, my edition (paperback) credits Robert Lazzaretti with the map... but doesn't actually include the map itself...?