Hellbox: Towards An Alternate Definition 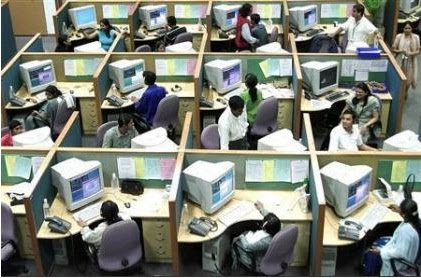 The word "hellbox" popped into my mind a few nights ago.  At the office/shopping development where I work security, a large company is setting up their new HQ on most of two floors on one building's office levels.  Part of my rounds has been to check the floors, so I've watched the development of the space from bare open concrete to where it's only a few weeks from having employees report to their new workplace.  Most recently has been the delivery and set-up of several hundred cubicles and workstations.

The sight of all those identical cubicles raises my hackles and crottles my greeps.  It's cookie-cutter, assembly-line workspaces, interchangeable, and my impression is that it's all meant for cookie-cutter employees, also interchangeable.  That, to me, is Hell.  And so a work cubicle is a "hellbox".

It turns out, though, that "hellbox" already exists as a word.  It's from the printing profession, back when set type was taken out of the printing forms and tossed into a box, which some junior apprentice was damned to sort back into each letter's individual slot in the typecases.  It's also used in a more general sense, of a container filled with a miscellany of small items difficult to sort apart.

But I like my own use of the word, to mean an office work cubicle, particularly when it's one of a large number of identical cubicles.  So I'm tossing it out there into the wilds of the Internet, where one hopes kind-hearted strangers will pick it up and give it a good home.

(How large is "a large number"?  The hellishness of cubicles seems to increase, at least in my mind, the larger the number of cubicles grouped together.  Some of the smaller companies, in the other office buildings, have smaller groups of cubicles, and those don't particularly bother me.  Four cubicles together, no problem.  Eight, well, okay.  Twelve, that's starting to push my buttons.  But forty or fifty or sixty in a group, like in that new HQ?  Ewwwww......)

Posted by Bruce at 9/18/2011 06:06:00 PM
Email ThisBlogThis!Share to TwitterShare to FacebookShare to Pinterest