I've complained before (bitterly, with much rending of sackcloth and angst-ridden wandering about fog-shrouded moors) about having had to shave off my beard -- my awesome, AWESOME beard! -- when I hired on as a security guard a few years ago.

Being off work for the next several months following the rotator cuff surgery, I've taken the opportunity to let the beard grow back.  After four weeks, we're at this stage: 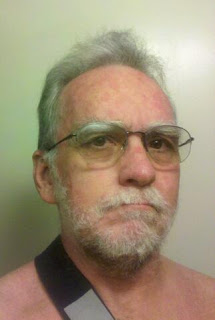 ﻿
Past the skeazy-bum stage and starting to fill in nicely.  Could even use a light trim on the lower edge of the moustache.  This is much more what my real face looks like.

Sure is grumpy lookin', though, isn't he?  That's probably because I know I'll have to shave it all off again in a few months.

Posted by Bruce at 11/16/2010 06:35:00 AM
Email ThisBlogThis!Share to TwitterShare to FacebookShare to Pinterest