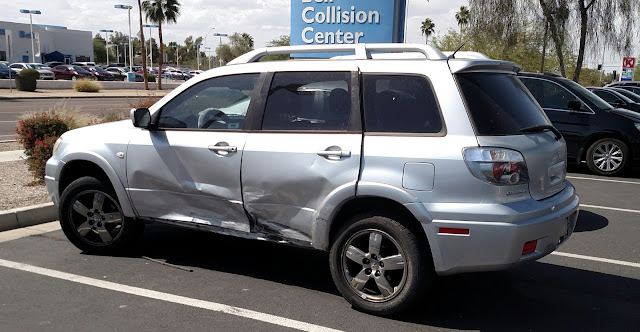 The verdict is in: Totaled. The driver who T-boned me Wednesday afternoon hit hard enough to spin the car 180°; I ended up facing south in a north-bound lane. I am not happy.
Posted by Bruce at 4/29/2016 04:35:00 PM 1 comment: Links to this post
Email ThisBlogThis!Share to TwitterShare to FacebookShare to Pinterest

It's nice when I win a Goodreads Giveaway and it comes with an extra flourish.


And this is what I won, Bandersnatch: C.S. Lewis, J.R.R. Tolkien and the Creative Collaboration of the Inklings by Diana Pavlac Glyer, illustratedby James A. Owen. And some bonus goodies: 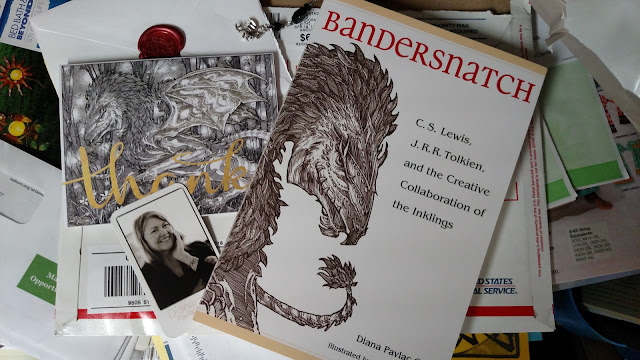 Bandersnatch has been getting very good buzz in other reviews, so I'm looking forward to reading it. Thanks, Diana!

Posted by Bruce at 4/21/2016 06:02:00 PM No comments: Links to this post
Email ThisBlogThis!Share to TwitterShare to FacebookShare to Pinterest

A Stark Comparison -- the Parker Novels 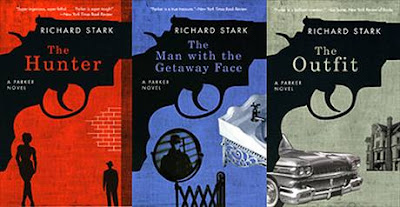 I’ve been listening to audiobooks of Donald Westlake’s Parker novels (written as Richard Stark), extremely hard-boiled crime novels with the sociopathic career criminal Parker as protagonist, and had a minor revelation.
Except for the eponymous Parker, everyone — EVERYONE — in the series is expendable. Backs are stabbed (sometimes literally), crosses doubled and tripled, loyalties abandoned without hesitation, lives taken without a second’s hesitation or regret. Forgiveness and mercy are for chumps, and chumps are the most expendable of all. Betrayal and death can come at any moment.
And the thought struck me: “Oh, this is like Game of Thrones, if GoT was set in the 1960’s criminal underworld, and people like Roose Bolton, Walder Frey, and Ilyn Payne were the primary characters.”
So, hey, if you’re tired of waiting for the next book in ASOIAF, the Parker novels might fill in the gap while you wait.
(Surely it's just a coincidence that prominent characters in ASOIAF are named Stark?)
Fan website: The Violent World of Parker
Posted by Bruce at 4/14/2016 02:17:00 PM No comments: Links to this post
Email ThisBlogThis!Share to TwitterShare to FacebookShare to Pinterest

There`s been some discussion over at File 770 about Fritz Leiber's 1965 Hugo-winning novel THE WANDERER, which features an alien catgirl, Tigerishka, among the characters. Tigerishka has tended to be poorly portrayed on the book's various covers over the years. Back in 1981, at the World Fantasy Con, Hilde and I came across sculptor Dale Enzenbacher's bronze statuette of Tigerishka, which we thought blew away other portrayals, so much so we bought the statuette. Here you go: 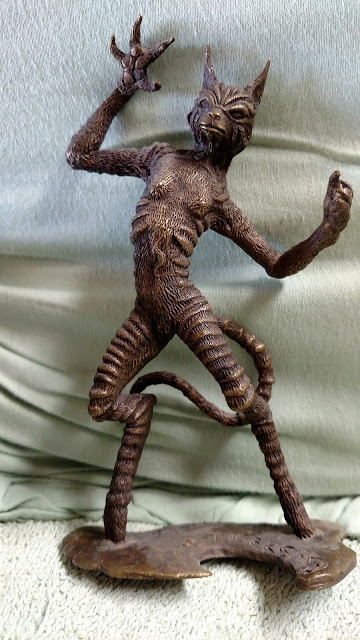