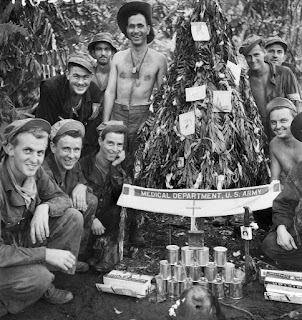 Sixty-nine years ago in 1942, these American soldiers in the South Pacific were celebrating a makeshift Christmas, with a "tree" decorated with bits of surgical cotton and cigarette cartons.

About that same time, my father would have been on a ship, also somewhere in the South Pacific.  He rarely spoke about his service in WWII, but I wonder if he and his shipmates would have tried to do something similar for their own Christmas celebration away from home.  (My mom once pointed ut to me that, since my dad's shipboard duty was running water purification systems that involved fire and steam and long pieces of pipe and tubing, he very likely knew how to make moonshine.  Not that he ever made any for us kids, to be sure....)

I don't know if any of the soldiers in the photo above died in WWII.  I know that my father saw combat, and saw shipmates die.  (He never talked about it.  Never.  But among his military mementoes were some photos of ships he had served on, and that were sunk in combat.)

Thirty-eight years later, my father would die on Christmas Day 1980.  That was not a good Christmas.

Shift to today, a family get together at a cousin's.  My mom and brothers, assorted cousins, with spouses and children and grandchildren.

This was a good occasion, for the most part, but with an underlying bit of melancholy for me.  Seeing my family reminds me just how old we're all getting.  My brothers are all grey- or white-haired now.  My mother seems thinner and more frail every time I see her.  And the reason why so many more than usual of the relations got together this year was because the cousin who was hosting the party had been diagnosed with a malignant brain tumor several months ago.  (She's had surgery, and is undergoing chemo, and actually looks pretty good, considering.  But still, the chance that she'll be around for next year's Christmas is a lot less than it seemed four months ago.

I don't like this getting old.  It kinda sucks.

But then again, the youngest person there was a grand-niece, an oh-so-cute toddler with a head of curly hair so flamingly red it would make the entire Weasley clan gnash their teeth in envy.  Someone with a long life still ahead of her.  Someone to feel positive about.

Posted by Bruce at 12/25/2011 11:23:00 PM No comments: Links to this post
Email ThisBlogThis!Share to TwitterShare to FacebookShare to Pinterest

﻿﻿﻿
The new kitten is losing the fluffy and starting to grow into a cat.
Posted by Bruce at 12/23/2011 05:11:00 PM No comments: Links to this post
Email ThisBlogThis!Share to TwitterShare to FacebookShare to Pinterest
Labels: cat, kitten, Siamese, Tyr

MY FRIEND TOTORO is a cool movie. But the coolest thing in it was the Catbus. Which is why I've had this sitting by my printer for several years:

BUT... in that alternate universe where Spock has a beard, the movie is titled MY FIEND TOTORO, and instead of the Catbus, you have...

There's only one thing cuter and more charming and more whimsical than a Catbus.   And that thing is...

Read more »
Posted by Bruce at 12/17/2011 06:25:00 PM No comments: Links to this post
Email ThisBlogThis!Share to TwitterShare to FacebookShare to Pinterest 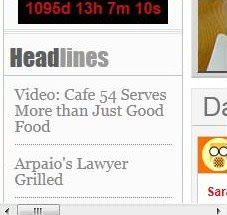 Posted by Bruce at 12/15/2011 01:24:00 PM No comments: Links to this post
Email ThisBlogThis!Share to TwitterShare to FacebookShare to Pinterest

This Cat Is Now Dead

I wrote about Rikkus earlier this year, in a post titled "This Cat Is Not Dead".  In that post, I mentioned Rikkus had been in poor health and we'd come close to having him put to sleep.  But I'd realized almost at the last minute that adjusting his thyroid medication might make him a little better again.

And it did, until just recently.  He gained back about a pound and a bit of weight.  Still very thin and frail, nothing like he'd been at his peak of health, when he'd been a stocky and robust cat who could hold his own against other cats.  But... okay.  He ate, he slept, he purred when he was petted.  He seemed to be okay with his life.

About a week ago, he stopped eating.  Completely.  He'd sometimes been picky about which flavor of canned food was being served him.  When all else failed, though, he'd always eat tuna.  Not that nasty, smelly, reddish cat food tuna made from scraps and ends, but the good stuff, the Human's Tuna.  He'd never turn that down.

Except now he even turned away from the good tuna.  I hoped maybe he'd get his appetite back in a few days, and offered him bites of various cat food flavors several times each day.  But he showed no interest, and it became clear that he wasn't just sick, he was getting ready to die.

He never seemed in distress or pain.  He was just... waiting.  Occasionally he'd totter over to the water bowl and get a few licks of water, but that was all.  He still purred when he was petted.  That pound of weight he'd regained went away, and more.  He was growing visibly weaker.  He still purred faintly when I stroked him about 10:00 this morning, but it was clear the end was near.  When I woke up about 1:30 this afternoon, he'd finally passed away sometime in those few hours.