In the same vein as my occasional "The Brave Free Books", I'm hoping "One-Buck Book Review" will turn into an ongoing series reviewing books that I've bought for a dollar or less. A lot of these tend to be ebooks offered at 99 cents as a promotional sale, frequently for the first book in a series; I'll note the regular price when needed.

Fair warning: I try not to be overly negative, but when a book has flaws that lessen my reading experience, I'll point them out. (A lot of the 99-cent sales are from indie/self-published writers who tend to be at an early point in their writing careers. Sometimes this means their craft skills don't match up with their ambition or goals. Occupational hazard of writing.)

So, the first offering: THIS STRANGE ENGINE, by Philip Ligon. Ebook, regular price 3.99, I bought it on sale for 99 cents. Published by Silver Empire, 419 pages. Amazon link. 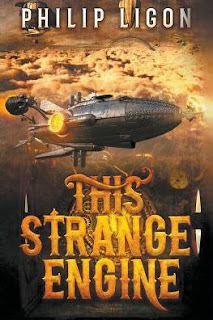 Steampunk fantasy mix. A portal to a fantasy world has introduced magic and magical creatures (elves, gnomes, cyclops, dragons, etc.) into Victorian England. Inevitably, some humans use the new resources and abilities to gather power and wealth for themselves. Ash, a disgraced cleric, is trapped under the thumb of the mysterious Misters, who coerce him into stealing magical objects. Aided by fellow friends in the criminal world (an invisible thief, a techno-gnome, and a barmaid with a hidden past). One of their opponents is Ash's ex-wife, who betrayed and tried to murder him, the start of the cascade failure that lead to his current dilemma and situation.

Adventures and disasters ensue. First in a series, this volume leaves many questions open, particularly regarding that portal to a fantasy world. I'll hazard a guess that in a later book, the portal will be traveled thru and adventures take place in the fae world.

All this is a good set-up, with a lot of possibilities. Unfortunately, two things kept me from enjoying the book as much as I had expected and hoped.

1) Ostensibly set in Victorian England, it felt very much set in the generic pseudo-England common to so very, very many fantasy novels. Steampunk, in my experience, usually offers stronger references to the history and culture of actual Victorian times. The "Victorian" details seemed scant and tacked onto the narrative.

2) My biggest problem, though, was Ash. He is one of the most whiny, self-pitying "Woe is me, my life sucks" characters I've ever encountered. Spending 400+ pages with the guy felt like a long slog through sad, depressed mud. I wanted to smack him upside the head and and say, "Your ex-wife has tried to KILL you. REPEATEDLY. Get a CLUE, you DUMBSHIT." (Note: Other characters give basically that same advice, over and over again, to Ash in the course of the book. To no avail.). It's only near the very end of the book that Ash finally gets a glimmer of self-realization and hope for himself.

The other characters were a lot more enjoyable. If the thief, the gnome, and the barmaid were to ditch loser Ash and go off on their own adventures, I'd probably read *that* book. They're kinda fun, aside from their inexplicable decisions to repeatedly stick by Ash.. But I'm reluctant to spend more time with Ash.

Overall impression: Interesting setup, but I felt the "Victorian" setting should have either been stronger, or simply go with the Standard Fantasy Setting it seemed to mostly be. Action scenes are well done. I felt making Ash such a completely miserable, self-loathing character was a poor choice.

Three out of five stars. I can see Philip Ligon set himself some ambitious goals for the story, but I came away feeling he didn't fully succeed.


Posted by Bruce at 9/18/2019 11:28:00 AM No comments: Links to this post
Email ThisBlogThis!Share to TwitterShare to FacebookShare to Pinterest
Newer Posts Older Posts Home
Subscribe to: Posts (Atom)