Local fan Lee Whiteside and AZSF.org, in conjunction with the Poisoned Pen bookstore, recently organized the first in hopefully a series of events modeled on the KGB Bar writers/readings in NYC and the similar Noir At The Bar events that have been organized in a number of cities. Featured writers give readings and talks at a suitable drinking/dining establishment, adding an extra measure of socialization to the author readings that usually take place at conventions.

Last night's event, held at The Sip, a coffee/beer place in Scottsdale. Readings were given by a trio of New Mexico writers; Jane Lindskold (ARTEMIS INVADED), Vic Milan (THE DINOSAUR LORDS), and Melinda Snodgrass (THE EDGE OF DAWN).

Looked to be about twenty people in attendance, which isn't bad for the first time out. I'm looking forward to future sessions. (Updates and details for future events will be available on the AZSF Blog.)

Posted by Bruce at 9/23/2015 05:58:00 PM No comments: Links to this post
Email ThisBlogThis!Share to TwitterShare to FacebookShare to Pinterest

The Pumpkin Spice Must Flo-- Wait, What?

I like the flavor of "Pumpkin Spice". I look forward to fall, when a variety of products come out with pumpkin spice flavor. Pumpkin cookies, pumpkin shakes, pumpkin applesauce, even the Pumpkin Spice M&Ms that seem to have aroused so much dread and loathing on Twitter.

But I have my limits. There are some things that, goddamit, pumpkin spice flavoring just should not be associated with. And this, I think, is the least suitable of all: 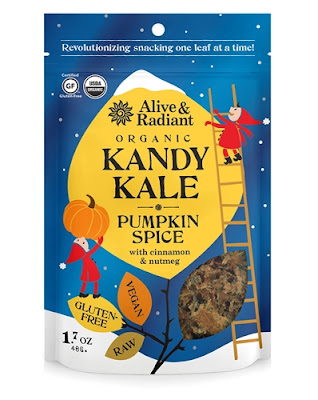 My experience with eating kale, in any form, has been, let us say, underwhelming. I don't want to see perfectly fine cinnamon and nutmeg ruined by adding it to kale chips.
Posted by Bruce at 9/17/2015 09:26:00 AM No comments: Links to this post
Email ThisBlogThis!Share to TwitterShare to FacebookShare to Pinterest 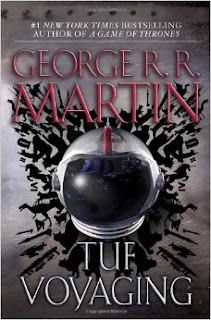 George R.R. Martin has been one of my favorite authors for a long, long time, and one of my favorite among his books is TUF VOYAGING, science fiction about an eccentric cat-loving character who comes into possession of the last remaining seedship of Earth's Ecological Engineering Corps, giving him... well, some pretty awesome power as he travels from planet to planet. Which he doesn't use to declare himself Emperor or some other familiar plot twist you might expect.

The ebook version of TUF VOYAGING, normally 11.99, is available for the bargain price of @2.99 until September 26th from Amazon, B&N, and other ebook retailers.

I will, however, temper my recommendation with a creeb about the cover Bantam put on this 2013 edition. I can understand why someone at Bantam might have thought, "Hey, let's do the cover for this in the same style as George's Song of Ice and Fire books. That will get us extra sales." But I don't understand why no one said, "That idea kinda sucks." The free-floating spacesuit helmet on the new Bantam cover is dreadfully generic for a book that stands out for being non-generic and confounding expectations, and the... thing... behind the helmet looks like a random spatter pattern unless you zoom the image up to actual printed book size, when you can finally tell its made of silhouettes of animals and spaceships.

I thought the cover from an earlier printed edition (Baen, 1987), actually showing Haviland Tuf himself, was much better: 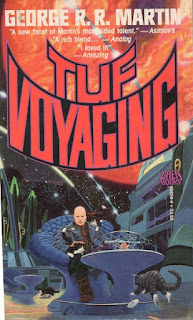 If you do a Google Images search on "Tuf Voyaging", you'll also get to see covers for a lot of other editions, domestic and foreign, almost all of which picture Tuf and are better than the Bantam cover. I especially liked this one, from a Spanish edition: 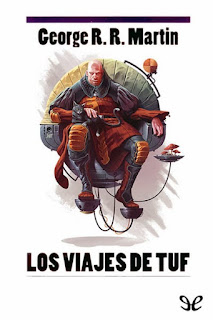 But regardless of which cover you prefer, it's a damn good book, and $2.99 is a great bargain.
Posted by Bruce at 9/17/2015 08:51:00 AM No comments: Links to this post
Email ThisBlogThis!Share to TwitterShare to FacebookShare to Pinterest 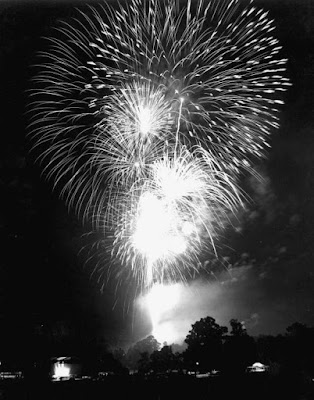 Received an email yesterday from Linda Landrigan, editor at Alfred Hitchcock Mystery Magazine, saying she wanted to publish "Beks and the Second Note", a short story I'd submitted there.

That put a grin on my face. This is my first sale since starting to write and submit fiction again at the end of 2012.

Sometimes submitting stories to markets feels like yanking on the cord of an old rusty lawnmower. After a while, it starts to feel like that engine is never going to start, no matter how many times you pull on that rope. So, yay, I feel validated. (Yes, I can still write stuff people want to pay me for!)

In the meantime, back to work; I need to send some of my other stories back out again, do edit-and-polish on several first drafts written earlier this year, and finish the last few pages of the current WiP. (Making a sale really helps with motivation, somehow.)

Posted by Bruce at 9/10/2015 03:21:00 AM No comments: Links to this post
Email ThisBlogThis!Share to TwitterShare to FacebookShare to Pinterest

The recent SFWA Cookbook has been getting a lot of attention, but it was far from the first science-fiction or fantasy themed cookbook. Here's another, that came out at the end of August.

Apocalypse Weird: The Last Meal is the latest brainchild from the people bringing out a shared-worlds series of books called Apocalypse Weird that currently stands at about a dozen volumes. Short version: All The Disasters Happen At Once. (Well, sort of; the over-arcing storyline for the project, explained at somewhat greater length here, isn't that simple.)

The Last Meal looks to provide not only a decent selection of ways to eat well (without eating your neighbors) in the wake of an apocalypse, but also includes some poetry, short fiction, and new clues to the AW master plan. From the sample pages I read, I was especially intrigued by the piece on making Mesquite Coffee; there are zillions of mesquite trees locally, with their seed pods usually just ending up as ground trash, so I may give this an actual tryout. (The Mesquite Coffee piece has also been published separately as a blog post on the AW website.)

Posted by Bruce at 9/08/2015 04:27:00 AM No comments: Links to this post
Email ThisBlogThis!Share to TwitterShare to FacebookShare to Pinterest
Newer Posts Older Posts Home
Subscribe to: Posts (Atom)