An Unsuitable Cover For A Classic

It's always good to see an important and influential SF writer's magnum opus get a new printing. But I was really taken aback to see Phoenix Pick had chosen this as the cover for their new edition of Cordwainer Smith's Norstrilia:

While elements in some of Smith's stories are pretty horrifying ("Mother Hitton's Littul Kittons"; "A Planet Named Shayol"), he's not a horror writer. His work is very much science fiction, with far flung space empires, animals uplifted to human intelligence, immortality drugs, and other aspects sheerly in the science fiction camp, written from idiosyncratic angles and perspectives that few other writers have managed to emulate. Smith might be described as the grandfather of the New Weird movement, epitomized by writers such as China Mieville and Jeff VanderMeer, although New Weird tends to frequently mashup horror, fantasy and science fiction (usually with the major emphasis on horror, it seems to me) into its own particular stew.

Googling around, I found this image originates as a piece of vector stock illustration, available from a number of stock-image providers. *sigh* While I can understand why a small press like Phoenix Pick would want to use stock art (they save a lot of money over a commissioned piece), I wish they'd hunted around longer to find something more suitable.
Posted by Bruce at 6/17/2015 04:22:00 PM No comments: Links to this post
Email ThisBlogThis!Share to TwitterShare to FacebookShare to Pinterest

My Day So Far 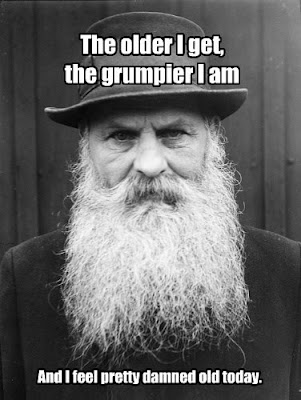 (The photo comes from Flickr Commons, a Swedish carpenter in 1932. But it's pretty much how the day's been.)

Posted by Bruce at 6/10/2015 08:16:00 PM No comments: Links to this post
Email ThisBlogThis!Share to TwitterShare to FacebookShare to Pinterest

I've been winning occasional books on giveaways from Goodreads, tor.com, and other contests. There's a goodly stack of them sitting in a box right over there [points helpfully], and figure it's about time I take a whack at reading and reviewing more of them:

I'm a pretty easy mark for "ordinary person gets superpowers" story.  This one, ehhh, sorry; it had problems.

There are several PoV characters. They switch back and forth, frequently in the same chapter, with no clear demarcation between the switch. That last is exacerbated by all the PoVs being 1st-person viewpoints, all expressed in similar speech patterns and phraseology. To try and make clear which character is speaking, some particular detail gets inserted into the first paragraph of each switch in PoV; it felt like a forced and clumsy technique. The prose is workmanlike, interrupted by the occasional *clunk* of a poorly written sentence or unnecessary phrase.

None of the characters came across as sympathetic, or engaging, or as possessing any real depth. They were all idiots and cartoons, to one extent or another. (To be fair, part of the plot is that men who live in Scranton, PA are, literally, idiots. There's a reason for this, not just because, y'know, Scranton.) I could never decide if the novel was supposed to be a straight story, or humor. If the latter, I didn't laugh at the jokes. The portions where the "humor" was based on self-destructive behavior (alcoholic blackouts, promiscuous sex, etc.) just made me feel sad. I felt like I was watching an Adam Sandler movie. (There are people who would consider that last a positive attribute. I am not one of those people.) (Spoiler whited out: The major female and male characters end up hooking up because, and almost solely because, they turn out to have *SUPER-ORGASMS!!!!* together.)

I finished the book, but more from a reviewer's obligation than the meager enjoyment I got from the experience. I'd give it two stars.

(Other reviews mostly rate it higher, four or five stars. That sort of thing is why I complain about the "irrational exuberance" of most ratings on Amazon, Goodreads, etc. No one wants to be a meanie, so most reviewers over-rank by at least one or two stars. Five stars? That's something I think should be given only to books that are extraordinarily good. I don't like being a meanie, either, but I try to give criticism that will be useful to the writer as well as the reader.)

This was a lot more satisfying and enjoyable to read than the above-reviewed book.

It's a steampunk story, or more exactly an "aetherpunk" story. "Aether" is a wind-like natural energy source, found more freely at higher elevations. The Dickensian society of the book develops this by dividing society into literal upper and lower classes; the upper classes live on immense airborne ships/platforms that float at aether-rich heights. The lower classes are ground-bound (or work as servants on the flying platforms), and are subject to occasional skyfalls of trash or sewage from the platforms above.

The aether's energy is accessed via spells written in magical grimoires. There had been some kind of worldwide magical disaster long ago that left society in disarray for centuries, and many of the grimoires surviving from before are either magically locked or written in dead or obscure languages.

Neil Franklin, the upper-class protagonist, is proficient in languages. But his fortunes have fallen, hard, and he ends up having to take a lowly teacher's position at a charity school high in the sky.

All Is Not As It Seems, of course. There are a great many secrets being held, and the plot develops as these secrets are revealed one by one, with significant consequences for both individuals and society.

And Neil himself has a secret: He's a deeply closeted and self-denying homosexual, in a society where gay men are still considered deviant and perverted. Only to feel a frightening attraction to the rugged Leofa (who has secrets of his own), workman on the school's sky-platform.

Langley Hyde does a nice job combining elements of fantasy, science fiction, and historical fiction. I thought the romance arc between Neil and Leofa was a bit predictable, but otherwise it's a fine debut novel. I note Langley Hyde is a Clarion graduate; you don't have to attend the Clarion workshop to become a better sf/fantasy writer, but, goddamn, it sure seems to help.

Collected edition of BTO comics #1-3. Streetfighters Rock, Bear and Lex vs. corporate thugs and villains, an alien deathmatch contest, and a giant monster.

The intent of this comic series seems to be to take typical scenarios from video games and give the main fighter characters some depth of background and character. (Rock was the sole survivor of an orphanage fire, Bear is a big gay guy, and Lex has commitment issues and can't seem to find guys who don't want a serious relationship with her.)

I thought this was an interesting challenge. Alas, I don't think this succeeded very well. The fight sequences were too video-gamey -- sometimes blatantly so -- to keep my interest. (Full disclosure: Over the years, I've found very, very, very few videogames that haven't bored me after a short period. I'm missing the Gamer gene, or whatever it is that attracts so many gameplayers so deeply.) The characterization, while not as cardboard or one-note as found in videogames, seemed rather strained and forced to me. In the end, my impression was that BTO was trying to have both the kind of characterization found in prose fiction and the kind of action found in videogames, and failed to fully succeed in either.

Paul Zehr is best known for Becoming Batman, a non-fiction examination of how someone might train and educate themselves to try and match Batman's abilities.

Project Superhero covers a lot of the same ground, but slanted towards a middle-school audience, and with a fictional story to overlay the educational aspects of the book.

13-year old comics fan Jessie is thrilled when her school announces a year-long cross-class project about superheroes. Students are to choose an individual superhero to represent as being the best. At the end of the year, a series of elimination debates will decide which superhero is the best superhero. Jessie chooses Batgirl.

Along the way, life continues. Family, friends, enemies, with complications and misunderstandings and young-teenager confusion. Jessie's work on her superhero project ties into those life and family issues.

It's a... nice... story. The problems and complications that arise get resolved, but I never felt any sense of urgency about Jessie's story. I think I'm probably too old for this book. Some YA and middle-school books can be read and enjoyed with no problems by adults, but this particular one feels really targeted for that middle-school-age audience.  For adults, Zehr's Becoming Batman would probably be the better choice. But this would make a good gift book for any middle-schoolers interested in comics or superheroes.

(As part of Jessie's project, she writes to real-life people who've done heroic or extraordinary things. The actual replies to those letters are included as part of Project Superhero.)

I think that's it for this round of "Brave Free Books". More reviews, hopefully, as I work my way through the box.
Posted by Bruce at 6/06/2015 05:07:00 PM No comments: Links to this post
Email ThisBlogThis!Share to TwitterShare to FacebookShare to Pinterest
Newer Posts Older Posts Home
Subscribe to: Posts (Atom)