Mike Glyer, over at FILE 770, has been providing daily or almost-daily posts collecting links to commentary on the Sad Puppies/Rabid Puppies controversy over the Hugo awards.

I dropped out of reading the comments to the linkposts there about a month ago. (Why make myself feel sick or angry? Yeah, some of the commentators are that bad.I reached my limit with the guy who feels mass-murderer Anders Brievik was admirable for slaughtering dozens of the children of liberals.) But I still browse the front page of F770, and it seemed to me the topic isn't sloping off (like most topics eventually do), but actually increasing.

So, because I have absolutely nothing better to do with my life (AIEEE! THE GUILT! THE GUILT IS GNAWING AT MY INSIDES LIKE CRAZED WEASELS ON PCP!), I gathered data on the number of comments noted at the top of each F770 linkpost. The results, through 5/21, are shown below. 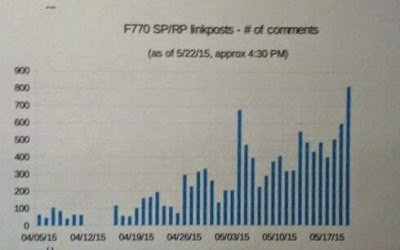 Yeep. I'll leave any actual interpretation of this data to others, those with the stomach to try and make a correlation to the contents of comments on the linkposts.

(The gap in early April is from several days when Mike posted single-subject topics related to SP/RP, but didn't post link collections. I also left data out from later single-subject posts.)

I sent Mike an advance copy of this post. He responded: "Wow, that's interesting. I've been too busy to notice a new record was set this week. And the new record is 9X as many comments as the record set by any F770 post having nothing to do with the puppies  had 88."
Posted by Bruce at 5/22/2015 09:30:00 PM No comments: Links to this post
Email ThisBlogThis!Share to TwitterShare to FacebookShare to Pinterest

The Wall Street Journal published a recent story about the Sad Puppies/Rabid Puppies gaming a vulnerability in the Hugo Awards nomination procedure to almost completely dominate the 2015 ballot with their own, ah, particular point of view.

I was reading the comments (yes, I should know better than to read comments on posts about this subject by now; doing so mostly just raises my blood pressure) and came across this paragraph from one John Hardy:

Personally, I don't like progressive sf because it is too predictable and I've read different variations of the stories over and over... underestimated ___ is harassed by powerful ___, yet through superior intelligence/emotional maturity/etc. supposedly unique to ___'s persecuted group, manages to humiliate/destroy ___  With that first bout of morally superior dialogue, I know what's coming and I'm just not interested anymore.


Hmmm. Somehow that sounded familiar. It sounded very familiar. And giving it some thought, I realized why.

Let me fill in the blanks in Mr. Hardy's template:

I've read different variations of the stories over and over... underestimated WHITE MALE AMERICAN HUMAN is harassed by powerful ALIENS, yet through superior intelligence/emotional maturity/etc. supposedly unique to WHITE MALE AMERICAN HUMAN's persecuted group, manages to humiliate/destroy ALIENS  With that first bout of morally superior dialogue, I know what's coming and I'm just not interested anymore.


That is an almost perfect template for much of the fiction John W. Campbell (in particular; but many other science fiction magazine editors as well) published in ASTOUNDING/ANALOG magazine back around the last mid-century.  Christopher Anvil, Eric Frank Russell, and Keith Laumer come to mind as authors who frequently wrote to the Campbellian template. (Sometimes to great effect. Russell's WASP is a heck of a lot of fun, even today.) This is also the template some of the SP/RP supporters seem to want to see return to current science fiction.

But I'm having a hard time thinking of any obvious modern-day authors who regularly invert that template, to have the ALIENS (aka women/gays/minorities) humiliate or destroy WHITE MALE AMERICAN HUMANS, as Mr. Hardy seems to be objecting to.

I can think of a few particular works that might fit such an inverted template. Spider Robinson's NIGHT OF POWER, about a black revolt that takes over New York City and declares it a separate nation. (It's also Robinson's worst book, imho.) Several books that eliminate males from the git-go and are about all-female societies. And, umm, not much else that comes immediately to mind.

But I think the best writing, the writing that might deserve a Hugo or other awards, is writing that tries to avoid templates, and formulas, and cliches. (I noted above that Russell's WASP is still a fun read. But, boy, after more than a half-century reading SF, it's hard to not see that template in action when trying to re-read WASP.)

And the best way to avoid those templates, those formulas, those cliches, is to try new approaches, new viewpoints, new techniques, new contents and characters.

In short... whoa, dirty word (for some people) coming up... I want science fiction to cast a wide net, to be open to possibilities, to be daring, to be unpredictable, to be... diverse.
Posted by Bruce at 5/16/2015 09:36:00 AM No comments: Links to this post
Email ThisBlogThis!Share to TwitterShare to FacebookShare to Pinterest
Newer Posts Older Posts Home
Subscribe to: Posts (Atom)