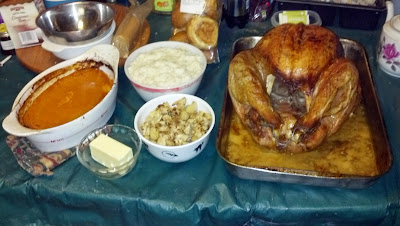 We had a small household Thanksgiving this year, with a smaller dinner as well. In years past when we had larger gatherings, I'd cook and bake a dozen or more dishes and desserts. This year, skipped the dressing and the green bean casserole, and only made three desserts: a raspberry/peach trifle, a key lime pie (store-bought, tho' I've made them from scratch plenty of times), and a cranberry-pear pie, pictured below:

The pie was a new offering this year, from a recipe on the Tillamook Cheese company's website. (I made an entry in one of their macaroni-&-cheese contests about five years ago, and they still send me emails.)  I don't think I've ever used pears before; never got any thrill, or disgust, out of them the few times I tried them growing up. (Mostly in fruit cocktail, which is pictured in the dictionary next to the entry on "meh".) When I saw a magazine article positing pears as The Most Mediocre Fruit, I found myself in agreement, and haven't had them in the at-least-several decades since. (I couldn't Google up that old article, but here's a similar list putting pears solidly in the undistinguished middle of the fruit index.)

But I've been eating a lot more fruit lately (a subject for another post), and have been looking to expand beyond my usual bananas/grapes/citrus horizons. The addition of cranberries seemed to hold promise for a more distinctive flavor from the Tillamook recipe, so I picked up some red pears at the local Sprouts (my top choice for produce) and made the pie for Thanksgiving.

Overall judgment?  Pretty damned good.  Most of the flavor came from the pears and cinnamon (there may be foods that aren't improved by cinnamon, but I can't think of any offhand, except maybe broccoli), punctuated by tart bursts from the whole cranberries scattered throughout.

A few quibbles with the recipe: You can tell from the photo above that the pie produced a lot of juice, so if I make this again (I probably will), I'll add an extra spoonful or two of flour to thicken the juice more. Next time, I'll chop the sliced pears into smaller pieces, and might try a rough chop on the cranberries as well, to produce a more blended flavor. The egg wash on the lattice top used a whole egg; I'll probably use an egg white wash instead. And I'll probably add another five minutes to the cook time; the bottom crust was cooked through, but only just; I like my pie crust to be, umm, more cooked.

Oh, and one important tip: Peeled pears are extremely slippery. I peeled the pears over the kitchen trash can to catch the peelings, and every one of the pears went flying out of my hand, and had to be picked out of the trash can and rinsed off, once I reached a point where I was trying to grab actual pear and not pear-skin.
Posted by Bruce at 11/29/2014 03:49:00 AM No comments: Links to this post
Email ThisBlogThis!Share to TwitterShare to FacebookShare to Pinterest

War and Freedom: Centennial and Semicentennial

This has been noted many times, in many media, over the last several months.  But I wanted to do a signal boost for two particularly noteworthy, and ongoing, radio drama series about World War I, the BBC Radio4's Tommies and Home Front.

Tommies is a weekly dramatization, based on private diaries and other records, of the experiences of British officer Mickey Bliss and his fellow signallers, from the Lahore Division of the British Indian Army, on the battlefields of France.  It gets pretty intense, both from a military-history viewpoint and in the clashes and interactions between the varied characters and personalities who took part. It's messy and chaotic and Things Going Wrong. There's even kind of an SF element to it, with Bliss and his men responsible for one of the first field radio units, an affair with equipment weighing hundreds of pounds, difficult to set up and maintain, and delicate and cranky enough to frequently fail to work without frantic MacGyvering with spit and tin foil.

Home Front is the same war, only, well, back on the Home Front in the British Isles itself.  There's the same messiness and sense of depth, deeper than usually presented in historical dramas in the period. The large cast of characters even includes a German national stranded in Britain at the war's outbreak. The plan for the series is to eventually provide a day-to-day drama covering the entire course of the war.

Both dramas provide a closer, more intimate eye on the issues and lives of participants in World War I, rather than the sweeping, epic, pieces-on-a-gameboard overview more commonly presented.

Episodes of Tommies can be listened to here, available until December 11th. Home Front, which is presented in shorter 15-minute episodes five times a week, can be found here; there are also "Omnibus" editions of Home Front, collecting an entire week's episodes in one bundle for download and podcasts, available here.  The Home Front episodes are available for listening "indefinitely", both directly online and via download; the Tommies episodes are only available until December 11th (no podcasts or downloads, alas).

The other anniversary of note happened fifty years ago, rather than a century. That was the founding of the Free Speech Movement at the University of California at Berkeley (UCB for short) in 1964.

The FSM  gets little note in most histories nowadays. It seems to be remembered more as a "wanting to be able to use dirty words" thing than anything else.  It was quite a bit more than that, and it was the originating point for later, larger, more widespread protests against the Vietnam War.

UCB had been the site for numerous advocacy committees and organizations setting up tables and passing out literature for various causes (anti-death penalty, pro-civil rights, and early anti-Vietnam activity, etc.). In November 1964, the UCB administration attempted to enforce a complete ban on such activity.

When several groups continued to post tables on UCB property, police attempted to arrest Jack Weinberg, who refused to produce ID. Student reaction was surprisingly strong and quick; the police car the man had been put into was surrounded by a large crowd, preventing the police from leaving with their arrestee. The standoff lasted for 32 hours, and was the beginning of months of confrontation, including a student occupation of a UCB building and an eventual large-scale raid by police that arrested 800 students.

The Free Speech Movement was the progenitor of a lot of later, more widespread social protest, including the anti-war movement protesting America's involvement in Vietnam. It was a strong influence on civil rights and feminist activity as well. Being primarily a reaction against attempts to quell political discussion and activity, it's kind of odd that it seems to be remembered as mostly a "pro-obscenity" movement, when it's remembered at all.  (I was about twelve when things blew up at UCB, not an age when I was paying much attention to current events, but even I remember the FSM's actions got quite a bit of news coverage at the time.)

Berkeley has produced a website about the FSM era that provides a lot of the history and background for those events and the persons involved in them.  A useful timeline can be found here.

A Trip To The Arizona-Sonora Desert Museum [Photos] 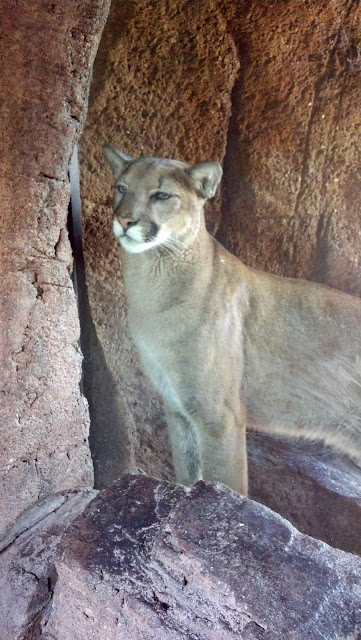 Hilde and I go to TusCon, a small convention held in Tucson every year. Usually it's a Friday-Saturday trip, driving back to Phoenix Sunday afternoon. This year I wasn't able to get off work Friday night, so we made it a Saturday-Sunday trip, staying over until Monday morning, and using the opportunity to visit the Arizona-Sonora Desert Museum out west of Tucson.

The ASDM presents both plant and animal life of the Sonoran Desert/Baja California area of the Southwest US and Mexico. I took a lot of cellphone pictures, with mixed success; a fair number of the animals were moving too quickly to catch a good shot with the cellphone's slow shutter speed. (The river otter was pretty much a blur.) What follows are some of the best of the batch.

The big handsome mountain lion over there was one of my best shots. The mountain lion habitat is two-sided, with one side having a wide moat and high walls separating viewers from the artifical cliff-side area where the big kitty resides. At the back of a cave up on the cliff, there's a wide and thick glass viewing window to a second path for visitors. Sometimes the mountain lion comes right up to the window to check out his visitors. This was one of those times, and I caught it at an angle that minimized reflections from the window.

More photos below the break.