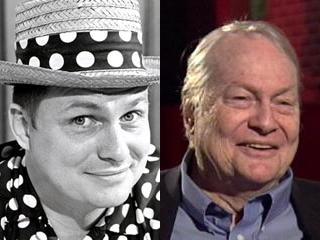 Bill Thompson died a few days ago.  That wasn't the name most people of my generation, growing up in the Phoenix area in the 50's, 60's, 70's and even 80's, remembered him by.  To us, he was "Wallace", lead performer of (original title) "It's Wallace", though probably most widely known as "The Wallace and Ladmo Show."

Wallace & Ladmo was a locally produced kids' show that began in early 1950's Phoenix, Arizona. Like a lot of local kids' shows, cartoons were the bait to draw kids into watching.  Where Wallace & Ladmo differed, though, was in the material between those cartoons. Thompson was creative and inspired and, well, kinda goofy. He produced skits and other things far beyond what one would expect from a pocket-change budget and mid-century tech. (W&L was the first place where I saw stop-motion special effects made using Thompson and other living people in place of  Harryhausen-style manipulated models.)

With the introduction of the rubber-faced, even goofier Ladmo (Ladimir Kwiatkowski, previously a cameraman at station KPHO) a year or so into the show, the show's popularity grew even larger. In 1960,local radio personality Pat McMahon joined the cast, bringing an ensemble of outrageous characters (spoiled brat Gerald, superhero Captain Super, and others) with him. The three men were the linchpins for the show's remarkable 36-year run on tv.


Wallace & Ladmo could be silly, and goofy, and, yeah, sometimes dumb. But the skits and recurring characters could also be a bit subversive, poking holes in institutions and characters that took themselves too seriously. Sometimes they could be absurd to almost Beckett-like proportions. Sometimes, yeah, they fell flat.  Audiences tended to age and drift away (I was a daily watcher for the last half of the 1950's, and a frequent viewer through a lot of the 1960's, before things like college and the military drew my attention away as I got older.), but one reason for the show's longevity was that there was always a new audience coming up. By the show's final episode, there were a lot of second-generation and even third-generation watchers.

But thousands and thousands of kids, over nearly four decades, were kept amused and out of their parents' hair because of Thompson's love and dedication to his show and vision.

Thanks, Wallace.
Posted by Bruce at 7/27/2014 10:06:00 AM No comments: Links to this post
Email ThisBlogThis!Share to TwitterShare to FacebookShare to Pinterest 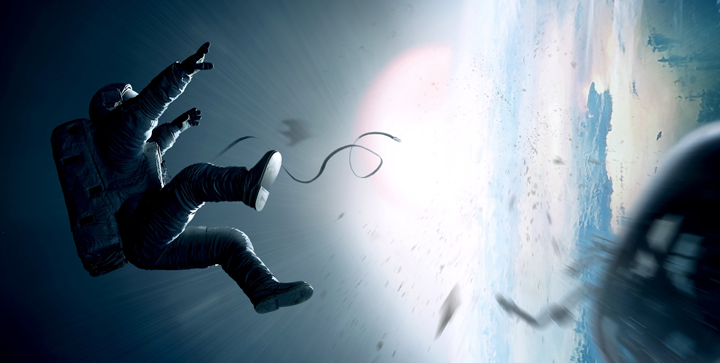 Yeah, almost everyone else in the world watched Gravity on a big* screen in the theaters when it came out last year. Hilde and I finally got around to watching it from Netflix last night.  The early trailers I saw on TV actually made me reluctant to watch it on a big screen; the many vertiginous sequences of spinning and tumbling were dizzying enough on the small screen.

Great action movie.  One non-stop, barely-survivable crisis after another.  Sort of a gun-free Die Hard sans the human villainy of Alan Rickman.

Post-viewing, some of the presentation and science is questionable.  Here's a list. That "The cables are slipping!" scene gave me momentary pause while watching, but most of what was on the screen was stuff I willingly suspended any disbelief in until afterwards.

And I learned that Hilde really doesn't like George Clooney.  (Just because he's a smug jerk who tends to play smug jerks onscreen....) At least he disappears** from the story fairly early on.

*"big" has a flexible value here.  The screens in movie multiplexes are a lot smaller than they were in the standalone theaters I frequented in my youth and young adulthood (though the multiplex screens have gotten better in recent years; for a while, some of the multiplex screens weren't much bigger than the bigger flat-screen TVs found in "home theaters".)  Watching the opening scenes of the first Star Wars movie on the Cine Capri's humonguous screen (70' x 30') was the very definition of awesome.

**Twice, actually, if you want to be picky.
Posted by Bruce at 7/05/2014 02:22:00 PM 3 comments: Links to this post
Email ThisBlogThis!Share to TwitterShare to FacebookShare to Pinterest
Labels: Gravity, movies

'There's nothing to writing. All you do is sit down at a typewriter and open a vein.'
-- attributed to various*

*The quote at the top has primarily been credited to sportswriter Red Smith.  But an interesting article at Quote Investigator gives a number of variants, some predating Smith's 1949 version.  I think I prefer Paul Gallico's 1946 version best: "It is only when you open your veins and bleed onto the page a little that you establish contact with your reader."
Posted by Bruce at 7/02/2014 10:48:00 PM No comments: Links to this post
Email ThisBlogThis!Share to TwitterShare to FacebookShare to Pinterest
Labels: blood donation, writing
Newer Posts Older Posts Home
Subscribe to: Posts (Atom)