How To Draw Sharks

From the treasure hoard of ConceptArt, a brief guide to "How To Draw Sharks" by Waterbird.

I'm linking to this not from an overwhelming desire to draw sharks (though God knows, sharks are Friggin' Cool, Man!), but because I found it an exceptionally well-done combo of art and writing. Waterbird's authorial "voice" is engaging and informal, but the guidance is informative, succinct, and easy-to-follow.

This is how to "how-to" a subject. 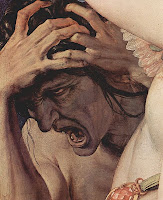 Not as bad a funk as the guy pictured over there. but still a significant funk. Feeling overwhelmed, overstressed, underslept, etc.

I realized about a month ago that I was showing signs of major depression (Thanks, Will!), which has actually helped. Being aware of that has helped me cope rather better -- got a long-standing problem with our 2007 taxes hopefully resolved, for one, which should actually mean we get a slightly larger refund than we did, rather than owing the IRS over a thousand dollars. Better progress on other fronts as well, though it would certainly help more if I could just skip that "sleeping" thing altogether.

So one of the things I wanted to start doing again was posting here. (Hopefully more often than every three months -- did I really let it go that long?)